There is enough evidence that increasing productivity does not necessarily result in increase in farm incomes. 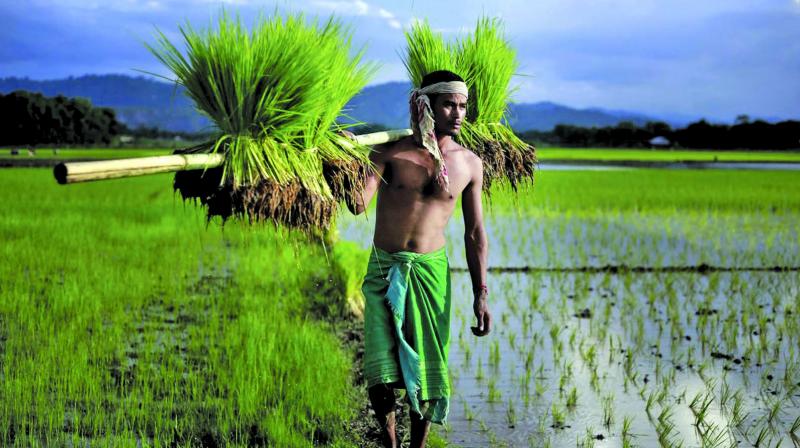 A farmer carries a paddy for transplantation on the outskirts of Guwahati. (Photo: AP)

Many governments have come and gone promising a better future for India’s farmers yet the farming community continues to live in distress around the country. Therefore, there is a good reason to be circumspect about government claims. Prime Minister Narendra Modi’s goal of doubling farmers’ income by 2022 thus is a brave claim. He has articulated a target and timeframe to achieve it. It requires courage and gumption to make such a definitive commitment particularly when the task of doubling farmers’ real income requires tonnes of hard work. Based on some estimates extrapolated by researchers from RBI data on Consumer Price Index, it may take 16 years to achieve what the PM has promised in seven.

On the other hand we have a job crisis in the country with increasing youth population. Therefore, expanding opportunities in rural areas in both farm and non-farm sectors to create income generation sources and also curb urban migration  becomes an imperative for the government.

All this means that there is a need to adopt extraordinary measures. A policy paper on doubling farmers’ income by Niti Aayog correctly identifies several fronts on which the battle must be waged. These basically include six areas, four out of which relate to increasing productivity and remaining two are about shifting cultivators from farm to non-farm occupations and improving terms of trade for farmers, respectively.

There is enough evidence that increasing productivity does not necessarily result in increase in farm incomes. Therefore, there is a need to shift the focus from “productivity” to “profitability”. Shifting this frame will open up fresh and out of the box thinking and will create seamless link to non-farm avenues as well. Let’s see how?

First, profit making is central to a business activity. So to begin with, farming must be seen as a business occupation. This should be easy to do as farmer is a natural entrepreneur engaged in the business of producing commodities using land, labour and capital. The problem is our legal framework, for instance, the Agriculture Produce Marketing Committee law and regulations whether old or new does not recognise this. It restricts the definition of an agriculturist to farming activities alone. In other words, if a farmer wants to engage into grading business, it would technically make him a “market functionary” thereby subjecting him to plethora of regulations.

Let’s take another example, if a farmer wants to set up a seed plant or a processing unit on his own land, he will have to subject himself again to labyrinth of regulations and inspector raj. Just changing the land use from agriculture to commercial for setting up a business entails upward revision in land price — this unleashes a cycle of corrupt practices which the farmer has to put up with.

Further, a processing unit under proprietary or Hindu undivided family is not given similar operational freedom as has been bestowed upon Farmer Producer Organisations (FPOs) under the new Model APMC Act to process, pack, brand and sell directly to consumers or retailers. While it is good to promote FPOs, it is difficult to fathom why such relaxations are not available to individual farmers to their households.

There is also a need for policy distinction between “agriculture” processing, which involves direct agriculture produce and “food” processing which involves use of two or more items under a recipe such as pickles, biscuits, etc. This is important because two processes are different and hence the product standards and technical requirements will also differ significantly. A distinction would facilitate establishment of small agriculture processing units at source.

Another area that can be seriously looked into for boosting farmers’ income is product differentiation based on agro-diversity. India has several niche commodity markets such as bananas of Tamil Nadu, Punjab’s basmati rice, Bengal’s Govind bhog rice and apples of Kashmir, amongst others. All these commodity markets are also globally competitive. Value of these markets must be realised and they should be promoted further. A proper strategy of product differentiation based on agro-diversity will also ensure sustainability of agriculture and may also create opportunities in other non-farm occupations such as “seed production” for specific geographical region.

Last but not the least, there are new technologies that can reduce cost of farming and running a small business. For instance, awareness on technical issues related to decentralised solar plants is still little amongst farmers. There is a need to educate farmers on basic and advanced awareness on technical and non-technical aspects of clean technologies. This will cut down farmer’s cost in significant ways as reliance on diesel or grid connected electricity will also reduce.

The above are only some of the ideas that start to surface when the frame of reference is changed from “productivity” to “profitability”. Even the PM’s call of doubling farmers’ income is perhaps more closely related to “profitability” and let’s be clear that focus on “profitability” will entail not just farming activities but will also include rural non-farm occupations as well. The examples above only substantiate this further.

The writers work for CUTS International, a public policy research and advocacy group