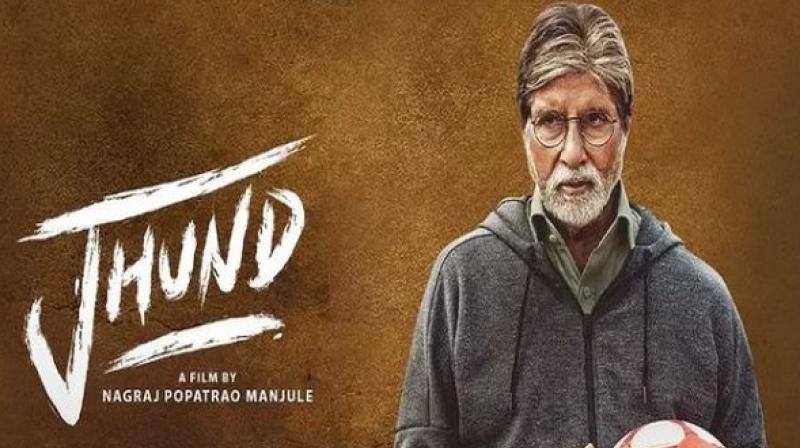 The Supreme Court on Thursday allowed the release of Hindi film 'Jhund' on the OTT (Over the top) platform on Friday. (Photo: Twitter)

New Delhi: The Supreme Court on Thursday allowed the release of Hindi film “Jhund” on the OTT (Over the top) platform on Friday. The release of the film with Amitabh Bachchan in the lead role was delayed due to a status quo order by the Telangana High Court.

A bench comprising Justice Indira Banerjee and Justice A.S. Bopanna said, “Prima facie it appears that the impugned order is clearly against the balance of convenience. The High Court has overlooked principles with regard to the grant of interim relief. In any case, claim if any of the respondents is a money claim. The impugned order shall remain stayed.”

The court also issued notice to the Hyderabad-based Nandi Chinni Kumar, on whose plea the High Court had passed the status quo order contending that the makers of “Jhund” allegedly violated the copyright law.

“Jhund” is a biographical sports film based on the life of Vijay Barse, a retired professor and a sports enthusiast who founded NGO Slum Soccer in Nagpur in 2001 that became popular among the poor children to play football transcending race, religion, language and gender distinctions.

The top court took up the case on senior advocate C.A. Sundaram mentioning on Wednesday for an urgent listing of the petition filed by film’s producer Super Cassettes Industries Pvt Ltd (T Series), pointing out that the film was already released in theatres on March 4 and it is scheduled to be released on the OTT platform when the High Court's status quo order came.

The senior advocate said the challenge to the movie had already been dismissed earlier. He was referring to a trial court rejecting Kumar’s plea for an injunction against the theatre release of the film. Kumar then approached the High Court challenging the trial court’s order and on April 29, the interim order of maintaining status quo was passed.