Another person too killed in the combat; local sources say it's a 14-year-old boy 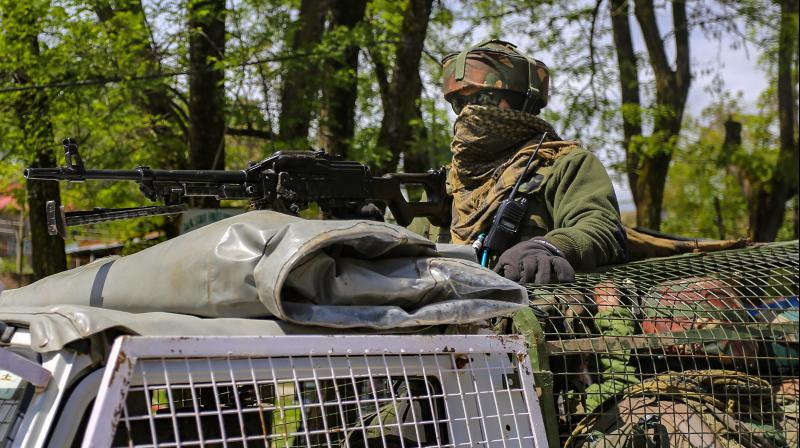 Army personnel leave after an encounter with the militants in the Chanjmullah area of Handwara in Kupwara district of north Kashmir, Sunday, May 3, 2020. An Army Colonel and a Major were among five security personnel killed in the encounter with terrorists. (PTI Photo) (PTI03-05-2020_000190A)

Srinagar: Three jawans of the Central Reserve Police Force (CRPF) were killed and seven others wounded in a ambush by militants in the Qaziabad area of the  Handwara belt in Jammu & Kashmir’s frontier Kupwara district on Monday evening.

The slain personnel have been identified as constables Santosh Mishra, Chandra Shekhar and Ashwani Kumar Yadav.

In retaliatory fire, one person was killed; the authorities were not sure whether it was a militant or a civilian. Local sources identified him as a 14-year-old boy named Omar alias Hazim Bhat, a resident of Khaipora locality of Qaziabad.

The attack came two days after an Army colonel, a major and two corporals and a sub-inspector of the J&K police were killed in a close-range firefight with militants in a village. Two militants were also slain in that clash on Saturday evening.

In another attack, a jawan of the Central Industrial Security Force (CISF) was injured in a militant attack in central district of Budgam on Monday. Police said the militants tossed a grenade towards a grid station of the Power Corporation of India at Wagoora in Budgam, resulting in splinter injuries to the CISF guard.

Giving the details of the Handwara ambush, officials of the CRPF and J&K police said militants attacked a party of the CRPF’s 92 Battalion (A Coy) at Wangam at around 5.30 pm with automatic weapons. Two CRPF men were killed on the spot and eight others injured. One of the critically injured jawans died on way to hospital, they said.

Reports said the exchange of fire continued for around five minutes.

However, local police officials confirmed that a local boy was “caught in the crossfire and killed on the spot”.

CRPF spokesman while confirming the death of three jawans said that reinforcements quickly launched an operation in the area. Police sources said that soon after the incident, Army troops, J&K police and the CRPF together laid siege to a vast area to conduct house-to-house searches.

On Friday evening,  Col Asuhtosh Sharma,  Major Anuj Sood, Naik Rajesh and Lance Naik Dinesh and J&K police SI  Qazi S.A. Pathan were killed in a fierce gunfight with militants in the Chanjimulla area, about 17 km from the place where the CRPF was targeted on Monday.

Two militants were also killed in Saturday’s clash. Local sources said there were four to five militants in the group which was engaged by the security forces in the gunfight at Chanjimulla after a brief exchange of rifle fire in the neighborhood in which an Army jawan Shinbe Mangesh sustained an injury in his right leg.

The authorities had suddenly lost radio contact with Colonel Sharma’s joint team of the Army and J&K police after it entered a private house where militants were present. Though the reinforcements including the Para Commandos of the highly-trained Special Forces of the Army were rushed to Chanjimullah, they could not move into the “highly intricate area” due to hostile weather and darkness, officials had said.

At first light on Sunday, the security forces officials learnt about the killing of the five members of the Army.

However, the Army maintains that the colonel’s team came under heavy gunfire from militants after it successfully evacuated the family taken hostage by militants to safety.

It reiterated that in the ensuing fire fight, two militants were “eliminated” and the five security personnel led by Colonel Sharma “attained martyrdom in the service of the nation.”