India   All India  05 May 2017  ED attachment order to continue against Virbhadra's kin: HC
India, All India

The high court, however, said that all the subsequent proceedings against them would remain stayed. 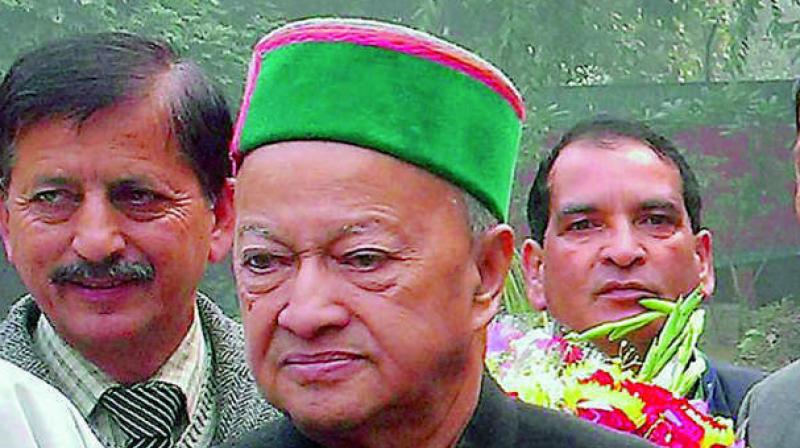 The interim order came on a petition filed by Virbhadra's daughter Aparajita Kumari and son Vikramaditya Singh against the March 31 provisional attachment order (PAO) of the ED. (Photo: PTI)

The high court, however, said that all the subsequent proceedings against them would remain stayed.

A bench of Acting Chief Justice Gita Mittal and Justice Anu Malhotra observed that in April last year also, the court had stayed 'all further proceedings' in connection with a March 23, 2016 provisional attachment order of their assets by the Enforcement Directorate (ED) in connection with the case.

"Therefore, we are of the view that the attachment order shall continue. However, the final order of the adjudicating authority passed, if any, shall not be given effect to while their pleas challenging provisional attachment are pending," the bench said.

The interim order came on a petition filed by Virbhadra's daughter Aparajita Kumari and son Vikramaditya Singh against the March 31 provisional attachment order (PAO) of the ED.

Earlier, the two had challenged the March 23, 2016 attachment order of the agency.
The high court on May 30 last year had refused to stay the ED's attachment proceedings against Virbhadra Singh and his wife Pratibha Singh, but said that the final order of the adjudicating authority would not be given effect.

They had sought stay on the PAO of March 23, 2016 and the proceedings against them under the Prevention of Money Laundering Act (PMLA).

In the instant case, Singh's children have challenged the recently amended second proviso of section 5(1) of the PMLA also, claiming it should be declared unconstitutional as it was contradictory to the scheme of the Act and violated the Constitution.
The second provison of section 5(1) of the PMLA provides that any property of a person may be attached if the ED's officer concerned has reasons to believe, on the basis of material in his possession, that if such property allegedly involved in money-laundering is not attached immediately, it is likely to frustrate any proceeding under the Act.
The bench said the issue required consideration as it involves various questions of law and fixed the matter for further hearing on July 26.

It also sought the response of the Centre and the ED on the plea of Singh's children.
The petitioners have sought stay of the March 31 PAO of the ED, saying the agency has 'exceeded its jurisdiction'.

Senior advocate Dayan Krishnan, appearing for the two, questioned the PAO saying such action cannot be taken in the absence of a charge sheet against his clients.
Additional Solicitor General Sanjay Jain, appearing for ED, opposed the plea saying it was 'pre-mature' as the agency had filed a complaint before its adjudicating authority which would take a call on it.

The petitioners claimed they were not named as accused in the ED's ECIR filed in the case and the March 31 order was passed but no scheduled offence has been alleged against them. ED has provisionally attached assets worth Rs 15,85,639 belonging to Aparajita and Rs 62,86,747 of Vikramaditya, their joint petition said and added this order was passed without them being named in the Enforcement Case Information Report (ECIR) of October 27, 2015 lodged against Virbhadra and others under the PMLA.