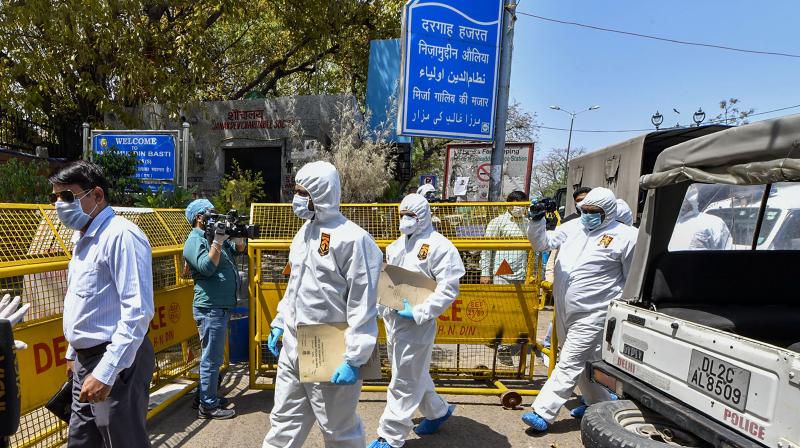 Forensics and crime branch officials arrive at Nizamuddin Markaz to conduct investigation, during the nationwide lockdown to curb the spread of coronavirus, in New Delhi. PTI photo

New Delhi: Eight Malaysian citizens, who attended a Tablighi Jamaat congregation at Nizamuddin here, were caught by immigration authorities at the IGI Airport while trying to flee the country through a special flight arranged for the stranded travellers of that nation, officials said on Sunday.

The eight Malaysian Tablighi activists were hiding in the Delhi-NCR region and they tried to take the advantage of a special flight arranged by the Malaysian High Commission for their citizens stranded in India due to the corona-triggered 21-day lockdown.

The eight, however, were caught by the immigration authorities at the Indira Gandhi International Airport here before boarding the special flight, a government official said.

The eight Malaysians were debarred from boarding the flight as the central government has directed all state police forces to take action against those foreigners who had come to India on tourist visa and participated the Tablighi Jamaat congregation.

The government has already blacklisted 960 foreigners and cancelled their visa for violating visa conditions.

The eight Malaysians have been handed over to the Crime Branch of the Delhi Police by the immigration authorities.

All eight will be put in quarantine, officials said.

So far, more than 400 COVID-19 positive cases and about 15 deaths in the country were found to have links with the Nizamuddin Markaz.

Action against the foreign Tablighi Jamaat members were taken after over 2,300 activists, including 250 foreigners, were found to be living at its headquarters located at Delhi's Nizamuddin last week despite the 21-day lockdown imposed to check the spread of coronavirus.

At least 9,000 people had participated at the congregation at the Nizamuddin Markaz last month after which many have travelled to various parts of the country for missionary works.

The participants include citizens of 41 nationalities. They are 379 Indonesians, 110 Bangladeshi, 77 Kyrgyzstan, 75 Malaysian, 65 Thai, 63 Myanmarese and 33 Sri Lankan citizens besides others.

The Home Ministry had also asked Delhi Police and police chiefs of other states, where these foreigners are currently living, to take legal action under the Foreigners Act and the Disaster Management Act.

The Home Ministry had said about 2,100 foreigners have come to India since January 1 and indulged in Tablighi activities in different parts of the country.