Correcting the record, Naidu said the Bill to amend the anti-corruption law was the one reported by the Select Committee of the House. 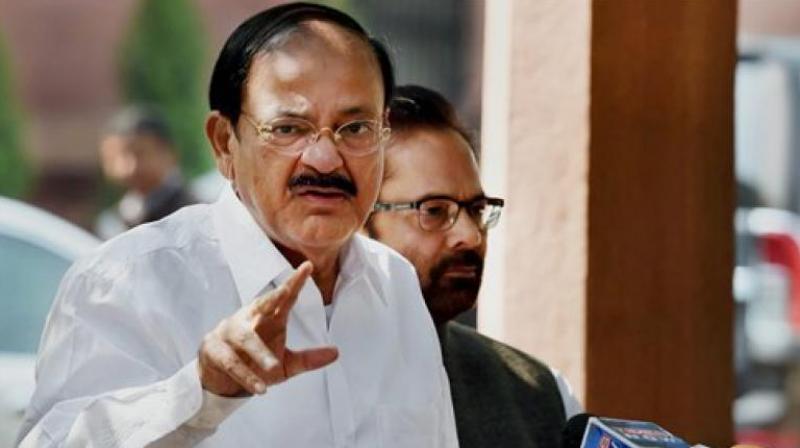 Naidu had to adjourn the proceedings in wake of the slogan shouting by the opposition members.(Photo: PTI)

New Delhi: Rajya Sabha Chairman M Venkiah Naidu on Thursday corrected the House records to state that a Bill to amend the Prevention of Corruption Act, 1988 has not been passed by the Lok Sabha yet.

This happened Sukhendu Shekhar Roy of Trinamool Congress raised the issue through a point of order, saying Rajya Sabha Deputy Chairman P J Kurien should recall his statement on Wednesday that the Bill he has allowed the minister to move has been passed by the Lok Sabha and transmitted to this House.

Roy said the Bill was brought to the Rajya Sabha on August 19, 2013 and was referred to a parliamentary standing committee for scrutiny.

The bill was not passed by Lok Sabha.

The TMC leader said the order passed by the Chair on Wednesday was under wrong premise and he should recall it.

Correcting the record, Naidu said the Bill to amend the anti-corruption law was the one reported by the Select Committee of the House.

Opposition members protested the attempts by the government to mislead the House on the issue as some ministers had also said that the Bill had been passed by the Lok Sabha.

But the issue was lost in the din created by other opposition parties raising issues ranging from special category status to Andhra Pradesh to the constitution of Cauvery Water Management Board.

Naidu had to adjourn the proceedings in wake of the slogan shouting by the opposition members.

Roy had on Wednesday sought a division of vote on introduction of the Bill. But due to the din and members raising slogans from the Well, Kurien could not take up the division that could have paved the way for introduction and subsequent passage of the Bill.