Shivashankarappa was seen beaming when the young woman tried to pin the Congress leader down on the contentious issue. 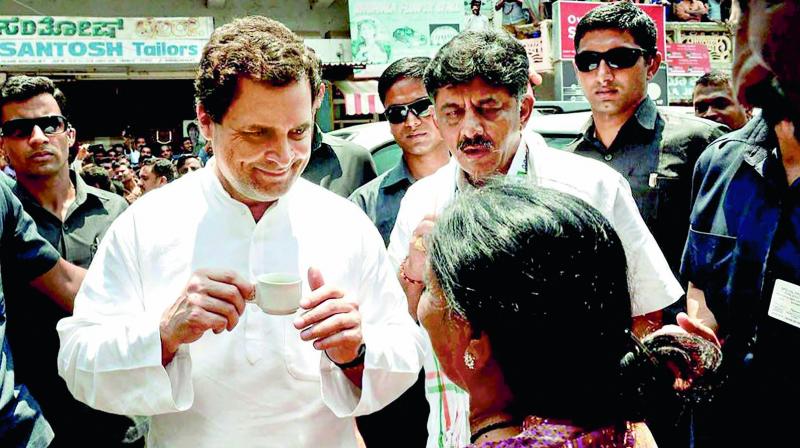 Congress president Rahul Gandhi interacts with a woman while having tea at a market enroute to Tumkur, during his Jan Sampark Yatra. (Photo: PTI)

Hubballi: It is a huge poll issue these elections, but Congress president Rahul Gandhi on Wednesday dodged a question on the row over independent religious status for Lingayats, describing it as a ‘Karnataka matter’ and left it to chief minister Siddaramaiah to respond at an interactive session with students and merchants of Davangere.

His evasiveness on the issue led to a pandemonium even as Mr Siddaramaiah rose to answer the student, who wanted to know the rationale behind the Lingayats seeking a minority status when elections were round the corner. In response, Mr Siddaramaiah justified his government’s decision to recommend a minority status for the community to the Centre, saying it had only accepted the Justice Nagamohan Das Committee report on the matter.

“My government acted on the issue only after receiving five appeals from seers of both factions for  independent religion status for the community,” he said, pointing out that the demand was not new and the Lingayat religion was established by social reformer, Basavanna over 850 years ago.

“The community leaders, including Shamanur Shivashankarappa, had requested me when I was felicitated by the Akhil Bharat Veerashaiva Mahasabha six months ago in Bengaluru to recognise Lingayatism as a religion by itself. I just forwarded their plea to the Karnataka State Minorities Commission and formed a committee to study it,” he contended.

Mr Shivashankarappa, incidentally who was on the dais, and who is opposed to the chief minister’s Lingayat as a separate religion move, was seen beaming when the young woman tried to pin the Congress leader down on the contentious issue.

Mr Gandhi, who took other questions, alleged that the RSS was running the government at the Centre, and Dalits, minorities and tribals did not feel safe under it.