Congress members trooped into the Well with placards demanding a reply from the PM on Nirav Modi's whereabouts. 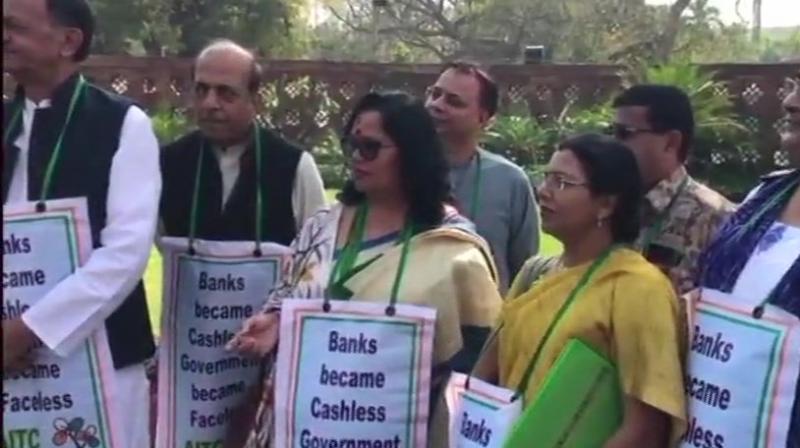 Trinamool Congress members too were seeking to raise the same matter Nirav Modi is the alleged kingpin of the Rs 12,700-crore fraud at Punjab National Bank. (Photo: ANI | Twitter)

New Delhi: The Lok Sabha was adjourned for the day on Monday after unrelenting protests by the opposition Congress over the Rs 12,700 crore Punjab National Bank (PNB) scam, and demands by the Telugu Desam Party (TDP) for a special package for Andhra Pradesh.

On the first day of the second-leg of the Budget session, the House witnessed uproar as Congress, TDP, TRS as well as AIADMK members trooped into the Well.

As the House reassembled, Congress members trooped into the Well with placards demanding a reply from the Prime Minister on diamantaire Nirav Modi's whereabouts.

Trinamool Congress members too were seeking to raise the same matter Nirav Modi is the alleged kingpin of the Rs 12,700-crore fraud at Punjab National Bank. The fraud came to light in February after the country's second largest state-run lender PNB reported that it has detected fraud in award of letter of understanding (LoUs) to the designer diamond jewellery maker.

TDP members protested in the Well demanding special package for Andhra Pradesh while those from the TRS sought increase in reservation quota in Telangana.

Amid vociferous opposition protest, Mahajan said she had received the resignation letter of Neiphiu Rio from the Lok Sabha following the Nagaland Assembly election results.

"I have accepted his resignation with effect from February 22," Mahajan said.

Before the beginning of the proceedings of the House, BJP members were seen clapping when Prime Minister Narendra Modi walked into the House. With folded hands, Modi greeted the members as well as those in the Opposition benches.

As the BJP and its allies captured power in the three North Eastern states, many of the saffron party MPs were seen wearing Assamese 'gamosa'.