India   All India  05 Mar 2017  Constable killed in Tral volunteered for mission that took his life
India, All India

Constable killed in Tral volunteered for mission that took his life

The 33-year-old policeman lost his life on Saturday in a clash between security forces and militants. 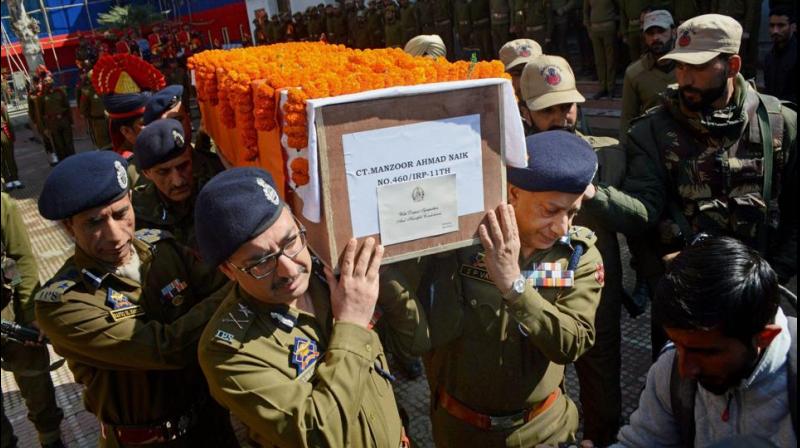 Senior officers of Jammu and Kashmir Police carry the body of constable Manzoor Ahmad who was killed in an encounter in Tral. (Photo: PTI)

Tral: A 33-year-old Jammu and Kashmir policeman, who was to become a father soon, lost his life in his second attempt to flush out militants holed up in a house in Tral in Jammu and Kashmir after miraculously escaping a volley of fire the first time.

Constable Mazoor Ahmed Naik came forward on two occasions after senior officers decided to bring down the house at Reshipora from which the two militants had continued firing on the police, army and CRPF.

Undeterred by blazing fire from assault rifles, the braveheart crawled in the pitch dark and placed charges (explosives used for road construction) around the house, a senior officer recalled.

The constable came under heavy fire from an AK rifle as he started retreating towards his position but managed to escape, they said.

“Koi baat nahi (don’t worry),” was his nonchalant reply when it was pointed out to him that he would have been killed and that he should not take such risks.

The explosives planted by him, though, brought down only half of the house.

This was followed by a heavy exchange of fire which continued till nearly 2 am.

The situation was tense as people in the nearby locality were protesting and social media was abuzz with rumours to mobilise more people, an officer said.

The firing then stopped and following a wait of two hours, Naik again volunteered to plant explosives to bring down what remained of the house, after an Army Major suffered serious gunshot injuries.

As he charged towards the house this time, he was hit by a volley of bullets from a militant. Despite his wounds, Naik planted the explosives on remaining part of the house before breathing his last.

Survived by a four-year-old son Aarzoo, a pregnant wife and two unemployed brothers, the resident of Salamabad in Uri (North Kashmir) was the lone bread-earner for his family.

He had announced to his senior officer earlier that he was proceeding on leave as his wife was expecting.

“It’s sad that we have lost a boy whose love for his duty and motherland will not go waste. The supreme sacrifice made by the constable boosts the moral of Jammu and Kashmir Police. I salute the brave heart,” director general of police SP Vaid said after the wreath laying ceremony held for the policeman.

Both militants, one of whom was from Pakistan, were killed in the encounter.

One of the militants was a Hizbul Mujahideen operative identified as Aaquib Bhat, popularly known as Aaquib Maulvi, who was active in the area for the last three years.

The other, Saif-ul-lah alias Osama, was a Pakistani terrorist working with Jaish-e-Mohammed.