Hazare on Day 7 of hunger strike, loses over 5 kg weight

Hazare went on a hunger strike from January 30 demanding the setting up of a Lokpal at the Centre and Lokayuktas in states. 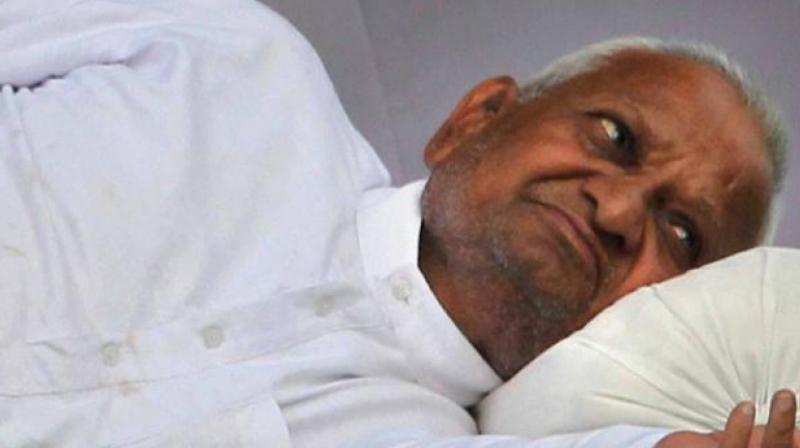 Doctors attending him says Anna is in a critical condition, advises to call off the strike as soon as possible. (Photo: PTI)

Ralegan Siddhi: Social activist Anna Hazare whose ongoing indefinite hunger strike enters the seventh day on Tuesday has lost over 5 kilograms and is in a critical condition, doctors attending to him said.

“Annaji has lost 5.5 kg weight till now. He is in critical condition. We have informed him. The ketone bodies in his urine are 3+ and sugar level is also reduced. We have advised him to call off the strike as soon as possible,” Dr.Dhananjay Pote said.

Hazare went on a hunger strike from January 30 demanding the setting up of a Lokpal at the Centre and Lokayuktas in states.

The 81-year-old has refused to take saline or ORS offered by the doctors, said Dr Pote who pointed out that if Hazare continues with the hunger strike, it may do irreversible damage to his kidney and brain.

“Today, the entire village will not cook food and we will sit here. The agriculture minister is coming today to discuss the demands of Annaji. Our village will go for self-immolation if Annaji’s demands were not fulfilled. His protest should stop in any condition and for this, our village is ready to do anything,” said Lankesh Auti, deputy sarpanch of Ralegan Siddhi village.

Minister of State Defence Subhash Bhamre representing the central government and Girish Mahajan from the state government who met Hazare on Monday also tried to convince him to call off his hunger strike.

“Their proposal does not have strong decisions, it is only meant to misguide the people. Our protest will continue,” Anna said on the government's proposal.
Under the banner of 'Jan Andolan Satyagraha', Anna Hazare launched his indefinite hunger strike on January 30 at his village Ralegan-Siddhi to demand the setting up of a Lokpal at the Centre and Lokayuktas in states as the Narendra Modi government "had failed" to set up the anti-corruption bodies.

"Through Lokpal, even the prime minister can be investigated if people will give any evidence against him...Similarly, in Lokayukta a chief minister and all ministers and MLAs under him can be investigated if somebody gives any evidence against them. That's why they don't want it. No party wants it. Lokpal was passed in Parliament in 2013, but the government is yet to appoint it," Hazare had told ANI earlier.