However, Trinamool Congress have time and again said that it is their government which has arrested the chit fund owners. 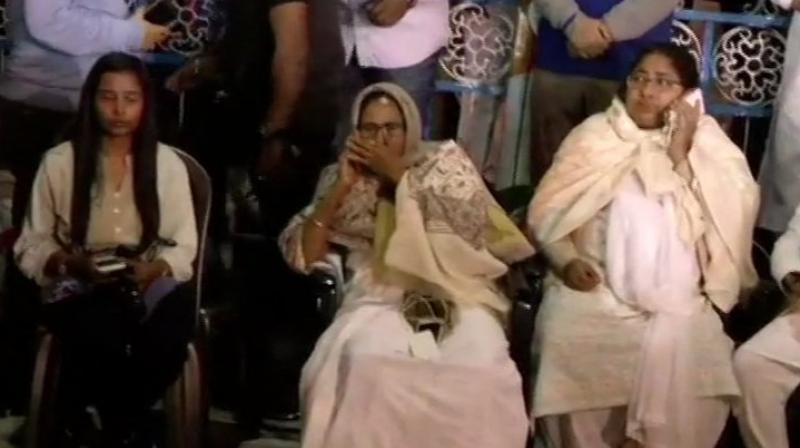 A furious Banerjee began a sit-in at the Metro channel in Esplanade area in the heart of the city to protest against 'insults' she faced at the hands of Prime Minister Narendra Modi and BJP chief Amit Shah. (Photo: File)

Kolkata: The defrauded investors and agents of various chit fund companies on Monday said they feel "betrayed" by the West Bengal government's move to stop CBI officers from interrogating the Kolkata Police commissioner and accused the Trinamool Congress dispensation of trying to hide the truth behind the multi-crore scam.

Asim Chatterjee, a convenor of the Chit Fund Sufferers Forum, told news agency PTI that the ongoing tussle between the state government and the Centre over CBI's attempt to question Kolkata Police chief Rajeev Kumar is not only condemnable but also an attempt to hide the truth.

Another Forum convenor, Jayanta Haldar, said the outfit would soon organise a rally of defrauded investors of the chit fund companies in the city.

"We will demand that all the culprits be arrested and the money be returned to the duped investors," he added.

"I was both an agent and an investor of a chit fund company. I was duped of about Rs 30 lakh. Now when the CBI is trying to find the truth behind the scam the state government is trying to stop it," said Bisu, a defrauded investor.

"We feel betrayed," he said and wondered why was the state government so desperate to stop the questioning of the top police officer.

Another defrauded investor Ujjal said he had lost Rs 25 lakh to both Saradha and Rose Valley chit fund companies.

"We invested in the chit fund companies after we saw the owners hobnobbing with top Trinamool Congress leaders and ministers. It made us trust these firms," he said.

However, Trinamool Congress have time and again said that it is their government which has arrested the chit fund owners.

"Our government arrested chit fund owners when we came to power. It is we who formed an SIT to probe the matter," Chief Minister Mamata Banerjee had said on Sunday in a hurriedly-called press conference outside Rajeev Kumar's residence.

An all-out war broke out between the Centre and the state government on Sunday, with the feisty West Bengal chief minister beginning a sit-in protest at a city landmark over CBI's attempt to question the Kolkata Police chief in connection with the chit fund scam. She said it stifled the spirit of "Constitution and federalism".

A furious Banerjee began a sit-in at the Metro channel in Esplanade area in the heart of the city to protest against "insults" she faced at the hands of Prime Minister Narendra Modi and BJP chief Amit Shah, hours after a CBI team that had gone to question Rajeev Kumar was detained in a face-off between the police establishments of the Centre and the state.

There were several other chit fund companies as well and the scam is said to have affected over 2.5 million small investors in the state.