The Kolkata police commissioner will appear before the CBI in Shillong as the environment is not conducive in West Bengal, Prasad said. 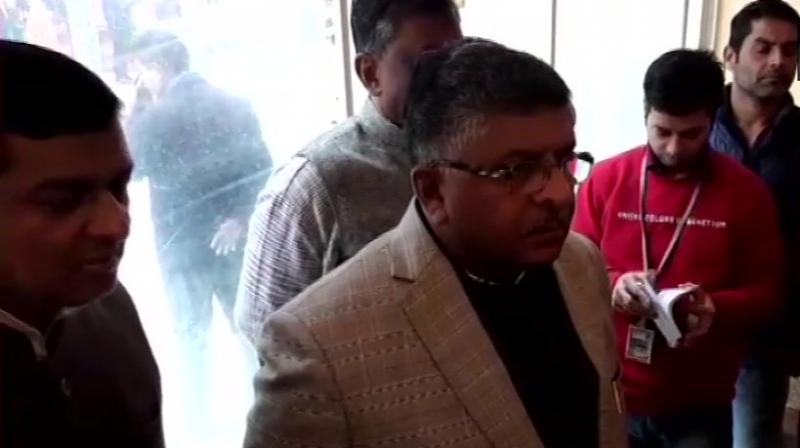 Senior BJP leader and Union minister Ravi Shankar Prasad welcomed the order and said it's a blow to the Mamata Banerjee government and a victory for the CBI. (Photo: ANI | Twitter)

New Delhi: The BJP on Tuesday projected the apex court order directing Kolkata Police Commissioner Rajeev Kumar to make himself available before the CBI as a blow to the Mamata Banerjee-led government in West Bengal and a moral victory for the investigating agency.

The Supreme Court said Kumar will appear before the Central Bureau of Investigation in the Meghalaya capital Shillong. The court also said no coercive steps, including the arrest of the Kolkata police chief, will take place during the course of the investigation.

Senior BJP leader and Union minister Ravi Shankar Prasad welcomed the order and said it's a blow to the Mamata Banerjee government and a victory for the CBI.

The Mamata Banerjee-led government in the state and BJP are at loggerheads after the CBI tried to question Kolkata's police commissioner in connection with chit fund scams. Banerjee has been on a 'dharna' since Sunday night over the CBI's attempts to interrogate the police chief.

BJP National General Secretary Kailash Vijayvargiya on Tuesday thanked the Supreme Court for directing Kolkata Police Commissioner Rajeev Kumar to appear before the CBI, saying it was a "victory of democracy" and demanded the resignation of West Bengal Chief Minister Mamata Banerjee.

The apex court on Tuesday directed Kumar to make himself available before the CBI and "faithfully" cooperate with the agency in investigation of cases arising out of the Saradha chit fund scam probe.

"The SC verdict is a victory of democracy. Mamata Banerjee should immediately tender resignation," Vijayvergiya told PTI. The apex court also said that no coercive steps, including the arrest of the Kolkata Police chief, will take place during the course of investigation.

The state government and the state police have repeatedly created hurdles during the investigation, he alleged.

A CBI team had gone to Kolkata Police Commissioner Rajeev Kumar's residence in the city on Sunday to question him in connection with the multi-crore chit fund scams, but was denied permission, bundled into jeeps and whisked away to police station.

The Trinamool Congress supremo has accused Prime Minister Narendra Modi and BJP president Amit Shah of trying to plot a "coup" in the state and alleged that National Security Advisor Ajit Doval is directing the CBI to "harass" political opponents on the orders of the PM.

"Mamata Banerjee is on dharna to stop CBI from questioning a police officer. The people of this country would have loved to see Banerjee holding dharna to return the money of chit fund investors," Vijayvargiya said.