Azad alleged that opposition party leaders were being treated as 'potential terrorists' and their phones were being tapped. 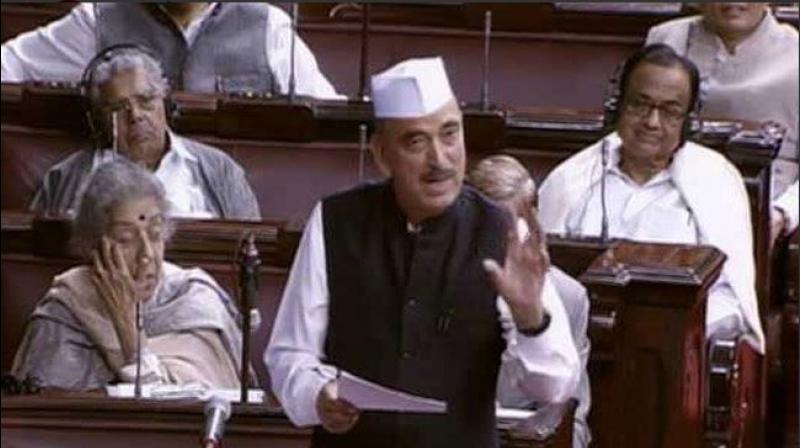 The government is not only polarising the country, but also dividing parties in the opposition and intimidating them by using the CBI and the ED, the senior Congress leader said. (Photo: Rajya Sabha TV)

New Delhi: The opposition in the Rajya Sabha accused the BJP-led government of polarising the country and creating a "fear psychosis" among the people, alleging that it was just renaming the earlier policies without delivering their benefits to the poor and the needy.

It is not a "game changer" but a "name changer government" which has failed to deliver on all fronts be it providing relief to farmers and poor, generate jobs or addressing the Kashmir issue, it said.

Participating in the debate on the Motion of Thanks for the President's address, Leader of Opposition Ghulam Nabi Azad attacked the government for creating fear, not only among people but also among the bureaucrats and opposition leaders.

"A fear psychosis has set in. You cannot see when you are in power. If someone is scared to talk to the Opposition or transact with them, it is not good for democracy or freedom of speech or even freedom of business," he said.

Azad alleged that opposition party leaders were being treated as "potential terrorists" and their phones were being tapped. "No one today talks to me over the phone because they say your phone is tapped," he claimed.

The government is not only polarising the country but also dividing parties in the opposition and intimidating them by using the CBI and the ED, the senior Congress leader said.

While supporting the draft triple talaq bill, Azad objected to the stringent punishment it proposes for a man for ending the marriage through instant triple talaq.

He said: "You have divided Shias and Sunnis. Now, you are dividing husband and wife. You cannot polarise the nation. ... What kind of division are you involved in? Why are you intimidating the minority community who are victims of fear psychosis?"

"You should spare some section. We don't want this New India. You have polarised it. Return us India of Gandhi where no fear existed," Azad said.Expressing concern over the Kashmir situation, he attacked the government for not framing any clear policy for the troubled state.

"The situation is pathetic. ...Borders are in a sad state of affairs. People are homeless and suffering. The government does not have any clear policy," he said, blaming the BJP government for being "weakest" in last 70 years.

He claimed that the largest number of ceasefire violations have occurred during the NDA government's tenure.

Not only civilians, but soldiers and higher rank army officials have been killed.

Azad said the dialogue and "hot-pursuit" in the state cannot go hand in hand.

Stating that the recently announced national health insurance scheme is another "jumla" (rhetoric) of this government, Azad said it will only benefit insurance firms and not the ordinary citizens.

Instead of an insurance scheme for 50 crore people, he suggested that the Centre should focus on building more government hospitals to provide cost-effective treatment to the poor.

"The examples of the US and UK are there. They spend 15 per cent of the budget on health. But all reports say insurance companies benefit, not the common man. I don't know how our people are going to benefit," he said.

Attacking the government for being insensitive towards farmers, Azad said the government making "false promises" of doubling income by 2022, which cannot be implemented with the current budget allocation to the farm sector.

A government panel, studying ways to double farmers income, has recommended that farmers income cannot be raised without an investment of Rs 6.4 lakh crore in the farm sector and achieving growth 10-12 per cent per annum, he said.

"You cannot achieve farm growth of 10-12 per cent even if you rule next 50 years. You cannot invest Rs 6.4 lakh crore. There is no chance of doubling farmers income. Why do you make such promises which cannot be fulfilled," he asked.

Azad said the average growth in the last three years has been 1.9 per cent per annum only. Moreover, meagre budget been allocated to the agri-ministry for the next fiscal, he added.

"Farmers are committing suicide. You are not doing anything. You are offering only false promises. We object to this," he said, adding that the government has kept the deadline of 2022 for several schemes as it does not want to be held accountable.