Hizb-ul-Mujahideen has confirmed that the slain militants were its senior local commanders. 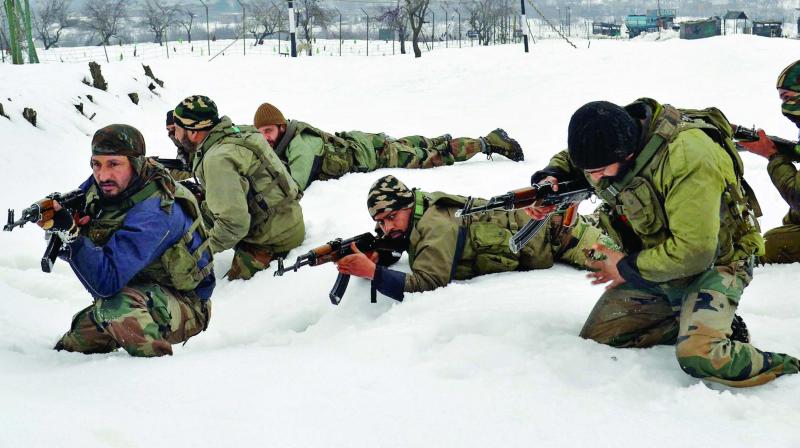 Commandos of Army and special operation group of J&K police take positions during an encounter at Sopore in north Kashmir. (Photo: PTI)

Srinagar: The security forces on Saturday shot dead two top Kashmiri militants while they were trying to enter politically-sensitive Sopore town in Jammu and Kashmir’s north-western Baramulla district “to carry out a major terrorist act”, the officials claimed. Two police officials were injured in initial response from the duo during the encounter.

Though the police has yet to identify the duo, the local sources said the slain men were two senior commanders of indigenous outfit Hizb-ul-Mujahideen — Azaharuddin alias Ghazi Umar and Sajad Ahmed alias Babar. The officials said that the police had information about the militants travelling in a car on the highway in the Sheer Amargarh area to relocate to Sopore.

Confirming it, a statement issued by the police said that the members of its counter-insurgency special operations group (SOG), along with other security forces, “thwarted a major terrorist action” by killing the militant duo.

“Information was received that militants were travelling in a vehicle and were planning some terrorist action in Sopore area. The police and security forces immediately swung into action and intercepted them near Amargarh Sopore,” it said. The statement claimed that while being challenged the militants lobbed a grenade and fired upon police party, injuring SP (operations) Baramulla Shafqat Hussain and sub-inspector Mohammad Murtaza.

“In the retaliatory action two militants were killed,” it said, adding that two AK series rifles, one pistol, four hand grenades and other arms and ammunition were recovered from the encounter site.

The Hizb has, meanwhile, confirmed that the slain militants were its senior local commander who had been affiliated with the outfit “for quite some time”.

It said Azaharuddin alias Ghazi Umar was a lecturer by profession who had abdicated the government service to join the outfit. The Hizb claimed that it was a “fierce encounter’ in which “many Indian troopers were seriously wounded”. The Hizb admitted the killing of the militants was “a big loss” to it and “freedom movement”. “But the struggle against India will continue till taken to its logical conclusion,” said the outfit’s ‘Deputy Chief Commander’ Saifullah Khalid and ‘Field Operational Commander’ Mehmood Ghaznavi in a joint statement to local news agency CNS.