India   All India  05 Jan 2020  Massive rally in Hyderabad against CAA
India, All India

Massive rally in Hyderabad against CAA 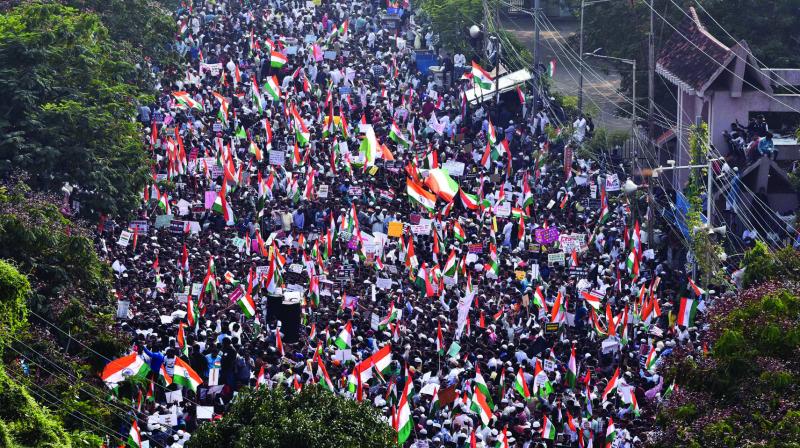 Protestors wave the tricolour during a demonstration against the amended Citizenship Act, NRC and NPR at Indira Park in Hyderabad. (Photo: PTI)

New Delhi: People, politicians and political parties continued their protest against the Citizenship (Amendment) Act and the National Register of Citizens across the country for the 22nd consecutive day on Saturday.

In Hyderabad, a massive turnout was seen at the “Million March” where protesters raised slogans of “No CAA, No NRC” and “Boycott CAA, NPR & NRC”, while in Mumbai, a group of artists held a protest at the Azad Maidan by creating paintings around the theme of “Save Constitution”.

Congress general secretary Priyanka Gandhi Vadra made an unscheduled visit to Muzaffarnagar in Uttar Pradesh to meet the victims of alleged police atrocities and former Union minister Yashwant Sinha announced that his political action group — Rashtra Manch — will take out a “Bharat Jodo Yatra 2020” from Mumbai to Delhi on January 9 to demand the withdrawal of the CAA.

In a move that predictably irked the ruling BJP government, Priyanka Gandhi Vadra met the families of those who bore the brunt of the recent violent protests against the CAA in Uttar Pradesh and later said that all the injured persons accused the police of unleashing a reign of terror and thrashing them for no fault of theirs. She also claimed that the Uttar Pradesh police entered a madarsa and beat up the maulana and his students.

“I met Maulana Asad Hussaini, who was brutally thrashed by the police.

Students of the madarsa, including minors, were picked up by the police without any reason. Some of them some have been released and some are still in custody,” she said while speaking to reporters.

Ms Vadra also went to the house of Noor Mohammad who lost his life during the protests. She spoke with his seven-month pregnant widow and one-and-a-half-year-old daughter. She also met Rukaiya, who will be getting married on Saturday, and said the police vandalised her house and damaged things bought for her wedding.

UP chief minister Yogi Adityanath termed Ms Vadra’s visit as “politics of appeasement” and questioned her “sympathy for rioters”.

“Why so much sympathy to those who burn, vandalise your property? Why are they standing with rioters and hooligans who harm peace, security and public property of the country. People are watching and they understand. Despite being rejected repeatedly, they are not desisting from politics of appeasement. They will never succeed in their designs,” a tweet from Yogi Adityanath Office said.

In one of the largest gathering against CAA in Hyderabad, thousands marched to protest against the CAA and NRC in the “Million March” where protesters raised slogans and were later seen cleaning up the streets.

Mr Sinha, meanwhile, said at a press conference in Delhi that Rashtra Manch will take out a “Bharat Jodo Yatra 2020” from Mumbai to Delhi to demand the withdrawal of the CAA. Mr Sinha said the 21-day yatra will begin on January 9 and reach Delhi at the Rajghat on January 30, on the death anniversary of Mahatma Gandhi. Actor-politician and Congress leader Shatrughan Sinha and former Gujarat chief minister Suresh Mehta were also present at the press conference. The yatra will pass through six states — Maharashtra, Gujarat, Rajasthan, Uttar Pradesh, Haryana and Delhi — and cover a distance of over 3,000 kms, Mr Sinha said.