Pakistan issued a statement on Saturday saying that there was an altercation near the gurdwara, but it was not a communal one. 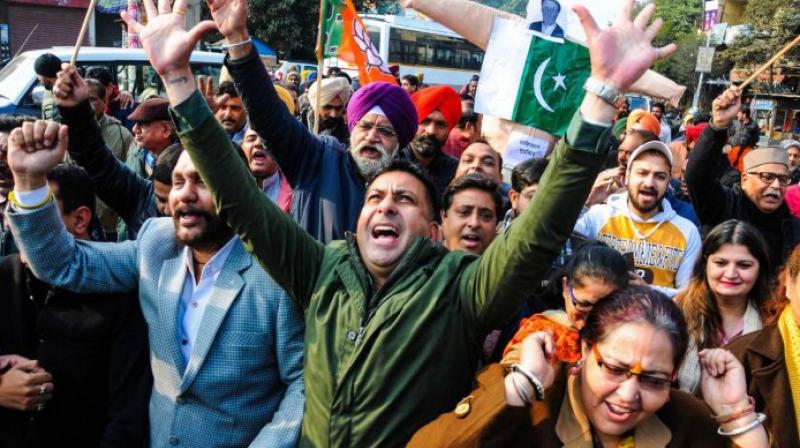 BJP workers shout slogans during a protest against Pakistan over alleged attack at on Pakistan's Nankana Sahib Gurdwara. (PTI Photo)

New Delhi: A day after a group of local Muslims pelted stones on Gurdwara Nankana Sahib near Lahore and threatened to destroy it, several political leaders cutting across party lines condemned the attack and called on the Indian government to take up the issue with Pakistani authorities to ensure the safety of pilgrims and adequate security for the shrine.

Amid the backlash and reports of desecration of Gurdwara Nankana Sahib, Pakistan issued a statement on Saturday saying that there was an altercation near the gurdwara, but it was not a communal one. Calling it a “scuffle in the city of Nankana Sahib on Friday between two Muslim groups”, Pakistan said that the accused have been arrested and attempts to paint the incident as a communal one are “patently motivated”.

“Most importantly, the Gurdwara remains untouched and undamaged. All insinuations to the contrary, particularly the claims of acts of ‘desecration and destruction’ and desecration of the holy place, are not only false but also mischievous,” Pakistan government said.

The statement followed Indian government’s demand for action against those who had attacked the gurdwara.

In Delhi, members of the Sikh community protested near the Pakistan High Commission and claimed to have submitted a memorandum, asking Islamabad to “explain the failure of law enforcing agencies” in the country.

The protesters raised slogans against Pakistan and Prime Minister Imran Khan and Sikh groups also organised a langar on the road near the Pakistan High Commission in which people of all communities participated.

The Bharatiya Janata Party and the Congress also held protests, but none of the protesters were allowed to go near the Pakistan HC. The government has increased the security cover around the Pakistan mission with an additional layer of CRPF personnel.

According to reports quoting Pakistani police officials, the mob that attacked Gurdwara Nankana Sahib on Friday was led by the family of a Muslim man who had married a Sikh girl. Police said the family was protesting the arrest of their relatives for alleged forced conversion of the girl.

“The provincial authorities in the Punjab province have informed that there was scuffle in the city of Nankana Sahib between two Muslim groups. The altercation happened on a minor incident at a tea-stall. The district administration immediately intervened and arrested the accused, who are now in custody,” Pakistan government said in a statement. It added that attempts to paint the incident as a communal one are “patently motivated”.

Many Sikh devotees were trapped inside Gurudwara Nankana Sahib during the mob attack on Friday, which the Pakistani government tried to dismiss as a “minor scuffle between two Muslim groups”. However, videos of the attack were available on social media in which one of the persons threatened to change the name of the Gurdwara to “Ghulam-e-Mustafa”.

Several political leaders cutting across party lines condemned the attack on Gurudwara Nankana Sahib. “The attack on Nankana Sahab is reprehensible & must be condemned unequivocally. Bigotry is a dangerous, age-old poison that knows no borders. Love + Mutual Respect + Understanding is its only known antidote,” Congress leader Rahul Gandhi tweeted.

Shiromani Gurdwara Parbhandhak Committee (SGPC), the apex body which manages Sikh shrines, said it will send a four-member delegation to Pakistan to take stock of the situation in Nankana Sahib. SGPC also plans to take up the matter with the United Nations.

Through a tweet, Punjab chief minister Amarinder Singh said: “Appeal to  to immediately intervene to ensure that the devotees stranded in Gurdwara Nankana Sahib are rescued and the historic Gurdwara is saved from the angry mob surrounding it.”

“We request the government to immediately take steps so that peace and harmony is restored,” said Punjab’s former chief minister Parkash Singh Badal while condemning the attack on Nankana Sahib.

Congress president Sonia Gandhi condemned the “unwarranted and unprovoked” attack on Gurdwara Nankana Sahib and expressed dismay and concern. She also called upon the government to take up the issue with Pakistani authorities to ensure safety of pilgrims and adequate security for the shrine to prevent any future attacks.

“The Government of India should also press for immediate registration of case, arrest and action against the culprits,” she said in a statement.

On Friday, India’s ministry of external affairs had said in a statement, “Members of the minority Sikh community have been subjected to acts of violence in the holy city of Nankana Sahib, the birthplace of Shri Guru Nanak Devji. These reprehensible actions followed the forcible abduction and conversion of Jagjit Kaur, the Sikh girl who was kidnapped from her home in the city of Nankana Sahib in August last year. India strongly condemns these wanton acts of destruction and desecration of the holy place. We call upon the Government of Pakistan to take immediate steps to ensure the safety, security, and welfare of the members of the Sikh community. Strong action must be taken against the miscreants who indulged in desecration of the holy Gurudwara and attacked members of the minority Sikh community. In addition, Government of Pakistan is enjoined to take all measures to protect and preserve the sanctity of the holy Nankana Sahib Gurudwara and its surroundings.”