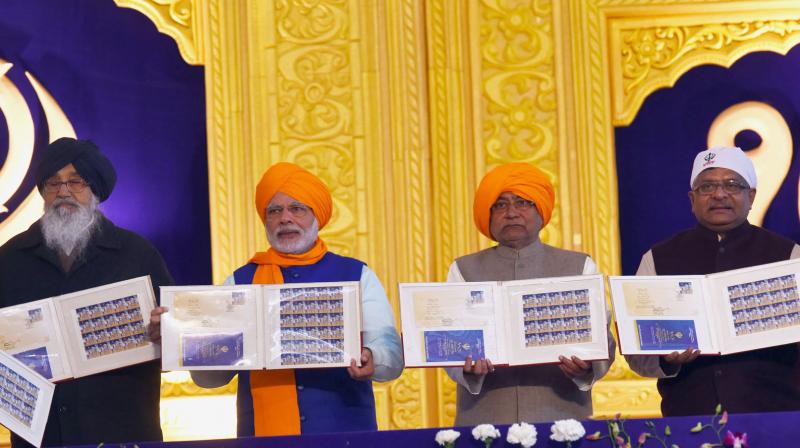 Patna: Prime Minister Narendra Modi on Thursday showered fulsome praise on Bihar Chief Minister Nitish Kumar for launching a movement against liquor and appealed to all to make prohibition a grand success, weeks after he lauded the JD(U) chief for supporting demonetisation

"I greet Nitish Kumar from the core of my heart for launching a campaign against liquor," the PM said as Nitish and his ally RJD President Lalu Prasad shared the dais with him during the concluding function of 350th Prakash Parva of 10th Sikh Guru Govind Singh in Patna.

"But, this work (prohibition) would not be a grand success only by efforts of Nitish Kumar or one party. All the political parties, social organisations and citizens have to participate in it to make it a 'jan-jan ka andolan' (peoples movement)," Modi said.

Bihar will become an example for the entire country through successful implementation of prohibition, the PM said.

The PM's mention of prohibition came in response to the Bihar Chief Minister's request to him to spread prohibition across the country. Fulfilling its poll promise, Nitish Kumar government had imposed total prohibition in Bihar.

Kumar in his address mentioned that Narendra Modi as Chief Minister of Gujarat had successfully carried prohibition that has been in force in the western state since its inception.

Though Modi and Kumar have been bitter political opponents, the Prime Minister had praised the Bihar Chief Minister recently for supporting demonetisation after the winter session of Parliament was washed out due to protests by a united opposition on note ban.

The JD(U) had walked out of NDA over naming of Modi as the BJP's prime ministerial candidate in 2014. The two leaders led a shrill campaign in the 2015 Assembly elections against each other with Kumar, in alliance with RJD, handing down a humiliating defeat to BJP.

However, breaking from opposition ranks, the JD(U) has supported demonetisation.

Bowing his head in reverence to the 10th Sikh Guru Govind Singh, the PM lauded his efforts for unity of the country through formation of "Panch Pyara panth".

Patting Nitish Kumar for taking personal interest in making elaborate arrangements for the 350th Prakash Parva, the PM said the Centre on its part, besides helping the Bihar government in organising the event, is celebrating the historic occasion in different countries through its embassies.