Bengaluru police commissioner Praveen Sood said an FIR had been filed and the victim had not yet approached the police. 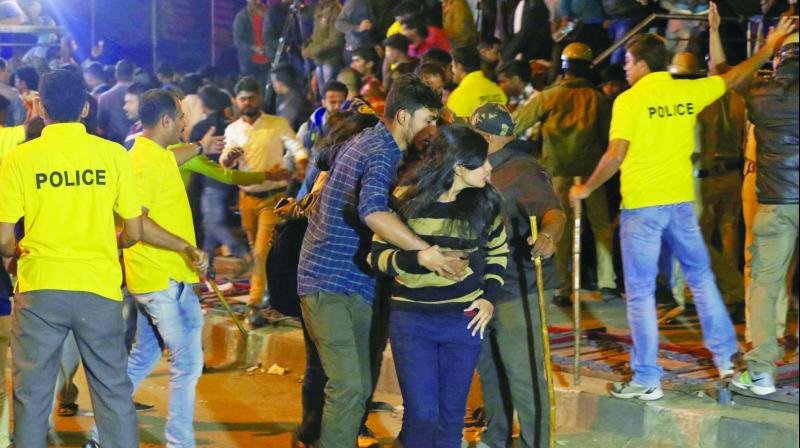 Bengaluru: Amid national outrage over several women being molested in full public view on New Year’s eve in midtown here,  another case of a woman being groped and assaulted by two scooter-borne men near her home has emerged with the shocking incident caught on camera.

The video footage shows two men accost a woman on a scooter, race past her and take a U-turn, only to park the vehicle, after which one of them jumps off and gropes her before escaping, even as bystanders watch without coming to her help.

In the video footage caught on the CCTV of a residential building, one of the two men was first seen approaching the woman and forcing himself on her and dragging her to the scooter while the other person is seated on it, before pinning her down.

As the victim resists and tries to free herself from the clutches of the culprit, he pushes her down on the road and both escape from the scene, but not before the victim slaps the one who had grabbed her.

A resident with the CCTV footage brought the incident, said to have taken place around 2.30 am on January 1, to the notice of the police.

Bengaluru police commissioner Praveen Sood said an FIR had been filed and the victim had not yet approached the police.

On late December 31 night, several women were molested and groped and lewd remarks passed by miscreants on M.G. Road and Brigade Road, despite the presence of 1,500 police personnel to control the unruly New Year revellers.

The incident drew flak from many quarters even as Karnataka home minister G. Parameshwara stoked a controversy by blaming the youngsters’ “western ways” for the incidents.

These remarks came in for flak even as the National Commission for Women chairperson Lalitha Kumaramangalam flayed the minister, demanding his resignation.