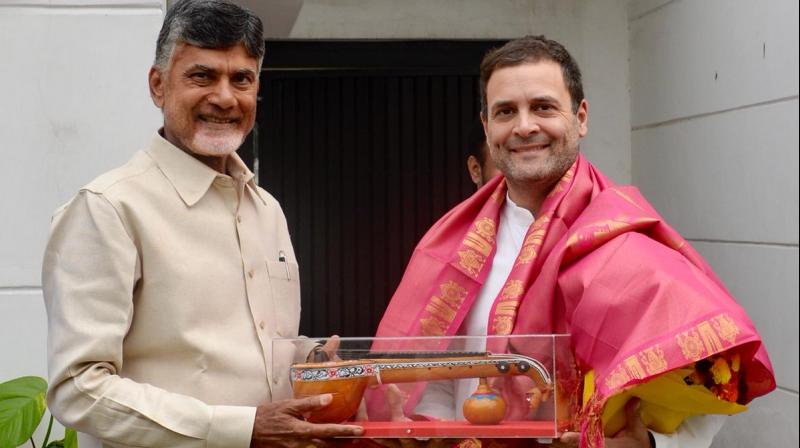 Kukatpally: Telugu Desam Party president N Chandrababu Naidu on Monday said that it is for the first time that his party and the Congress have formed an alliance for the benefit of the country.

Hitting out at the central government led by Prime Minister Narendra Modi and the state government led by Kalvakuntla Chandrashekar Rao (KCR), he alleged that both of them were working against the aspirations of the people and are dictatorial in nature.

"To fight them, we joined hands. KCR held a meeting, where he kept on slamming me but did not speak anything about the development he would do. That is their shallowness. Modi was given a clean majority. But he cheated the entire nation. He achieved nothing except roaming in foreign countries," he added.

Rahul Gandhi too hit out at the central and Telangana government as he spoke on the same lines as Naidu.

"In the past four and a half years, KCR and his government have cheated the entire Telangana and Hyderabad. KCR is a national champion in corruption, next only to PM Modi. He kept on increasing the project costs, paid contracts, but did give a single penny to farmers," he said adding that Modi too can do anything but not waive off the loans of farmers of Telangana.

Further sharpening his attack, Gandhi added, "TRS is the B Team of Narendra Modi. The real name of TRS is TRSS - Telangana RSS. KCR means Khao Commission Rao. KCR is the most corrupt person."

"Modi has CBI in his hand and that is why KCR has surrendered to PM Modi. A Team BJP, B Team TRS and C Team MIM. We will defeat BJP nationwide," he added.