Adm. Lanba said a “great deal of progress” has been made on ensuring synergy and “jointness” among the three services. 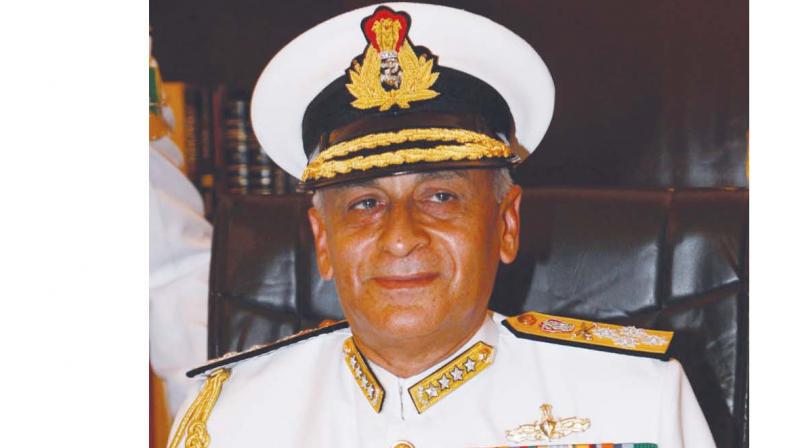 New Delhi: Navy Chief Adm. Sunil Lanba said on Monday that the Indian Navy was looking at inducting 56 warships and six submarines and the process for bringing in a third aircraft-carrier has been initiated, vowing to enhance the force’s maritime capability. He also assured the country that the Navy was keeping a round-the-clock vigil on India’s maritime domain.

“The Navy is looking at inducting 56 warships and six submarines to enhance its strength. This is apart from the 32 warships under construction,” he said at his annual press conference on the eve of Navy Day, that falls on Tuesday. The process for installing automated identification transponders on around 2.5 lakh fishing boats had been started as part of efforts to enhance coastal security, Adm. Lanba said. The pr-ocess for the induction of a third aircraft-carrier has been moved, he said.

Talking about the contract given to Reliance Naval Engineering Ltd for five offshore patrol vehicles, he said: “We are looking into the contract.” He added: “The bank guarantee for the deal has been encashed.”

Asked about the status of the proposal to set up a base at Seychelles’ Assumption Island, he said that talks were on with the government of the island nation. With the Maldives now having a favourable government, the two countries are set to strengthen maritime cooperation, the Navy chief added.

At present, India has logistics support pacts with the US and Singapore. Officials said it will provide for deeper naval cooperation, an increased engagement in maritime security, joint exercises and temporary deployments from each others’ naval facilities.

Adm. Lanba said a “great deal of progress” has been made on ensuring synergy and “jointness” among the three services. He noted, at the same time, that the Indian Air Force was against theatre commands and said that a higher defence organisation must be set up before starting any actual work in that direction.

In his nearly 70-minute briefing, the admiral listed various steps being taken to modernise his force, including the induction of a large fleet of military jets and helicopters.