India   All India  04 Dec 2018  ‘Kartarpur in Pak today due to lack of vision of then Cong leaders’: PM Modi
India, All India

‘Kartarpur in Pak today due to lack of vision of then Cong leaders’: PM Modi

'The credit of Kartarpur corridor goes to your vote. Correcting Congress mistakes was my destiny,' PM Modi said. 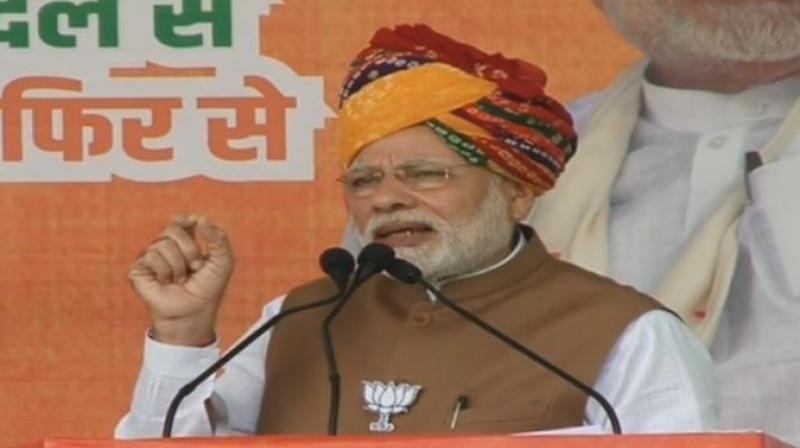 Addressing a rally at Hanumangarh in Rajasthan Prime Minister Narendra Modi said Kartarpur is in Pakistan today because the then Congress leaders had no idea about importance of Guru Nanak Dev and had no respect for Sikh sentiments. (Photo: ANI)

Prime Minister Narendra Modi used the proposed Kartarpur corridor linking Pakistan to India to hit out at the Congress on Tuesday and said the party will have to answer why this was not done 70 years ago.

Addressing an election rally at Hanumangarh in Rajasthan ahead of the elections in the state on December 7, PM Modi said Kartarpur went to Pakistan due to the lack of vision and sensitivity of the then Congress leaders.

According to PM Modi, Kartarpur is in Pakistan today because the then Congress leaders had no idea about the importance of Guru Nanak Dev and had no respect for Sikh sentiments.

"The credit of the Kartarpur corridor goes to your vote. Correcting Congress mistakes was my destiny," PM Modi said at the rally.

The headlines five years ago were about corruption and scams, the Prime Minister said.

"Have you seen any news of this kind in the last five years," PM Modi asked. Focussing on farmers and their problems, he said his government wants to make farmers "energy givers" and asked them to install solar panels, use drip irrigation and other modern methods of farming.

"The ‘naamdar’ does not know the difference between red and green chillies," he said, hitting out at Congress president Rahul Gandhi, who he has often referred to as "naamdar" (dynast).

"If you tell him that farmers are getting high prices for red chilli as compared to green chilli, he'll say farmers should grown red chillies," he said, alleging that the Congress was responsible for the pain of farmers.