The court fixed December 17 for commencing the trial by recording evidence in the case. 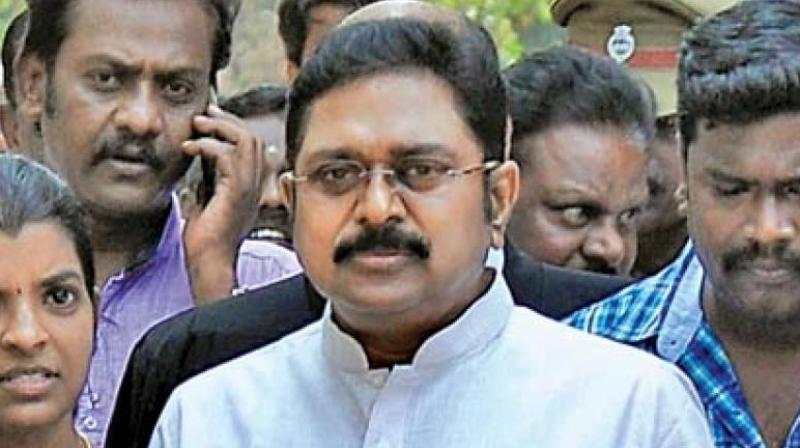 TTV Dhinakaran, who floated the Amma Makkal Munnetra Kazhagam party after being expelled from the AIADMK, was arrested in April 2017 here and later granted bail. (Photo: File)

New Delhi: A Delhi court on Tuesday framed charges of criminal conspiracy against former AIADMK leader TTV Dhinakaran in a case related to the alleged bribery of Election Commission officials to get the two leaves party symbol.

Special Judge Arun Bharadwaj put Dhinakaran on trial after he appeared before the court and pleaded not guilty.

The court framed charges against Dhinakaran for the alleged offences punishable under sections 120B (criminal conspiracy) and 201 (destruction of evidence) of Indian Penal Code (IPC) and under the Prevention of Corruption (PC) Act.

The court fixed December 17 for commencing the trial by recording evidence in the case.

The court had on November 17 ordered framing of charges against him.

Dhinakaran, who floated the Amma Makkal Munnetra Kazhagam party after being expelled from the AIADMK, was arrested in April 2017 here and later granted bail.

Alleged middleman Sukesh Chandrasekar, who is in judicial custody, was earlier put on trial in the case for the alleged offences of criminal conspiracy, destruction of evidence under the IPC and under the PC Act.

Dhinakaran's aide TP Mallikarjun and a man called B Kumar were also put on trial for these offences.

In 2017, Delhi Police's crime branch filed a charge sheet alleging that Chandrasekar had conspired with Dhinakaran and others to bribe poll panel officials to get the two leaves symbol for Sasikala-led AIADMK faction.

Dhinakaran won the by-elections held in Radha Krishnan Nagar Assembly constituency in December last year under the 'pressure cooker' symbol with a margin of over 40,000 votes.