It is speculated that the Congress vice-president will be running unopposed for the post of party chief. 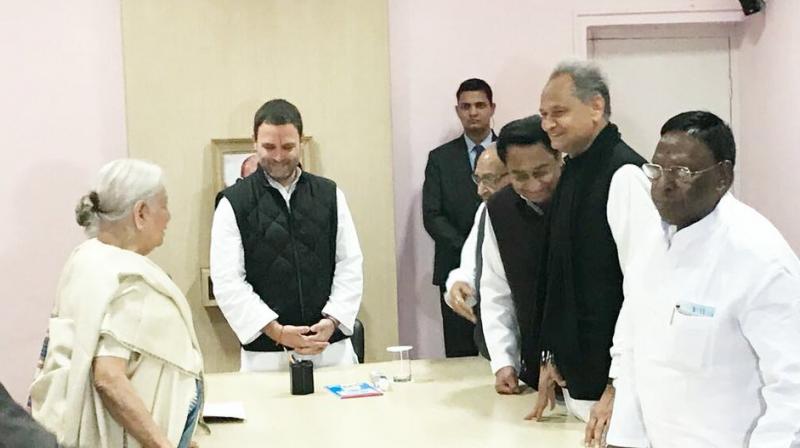 New Delhi: Ending the speculation over his elevation as party chief, Rahul Gandhi on Monday filed the nomination for post of President of the Indian National Congress, paving the way for a generational shift in the leadership of the party headed by his mother Sonia Gandhi.

The 47-year-old Gandhi scion is likely to emerge as the lone candidate in the fray, clearing the decks for his elevation to the party's top post, succeeding his mother, who has held the post for 19 years in a row.

There were five sets of nomination forms filed on his behalf by top Congress leaders, including CWC members, party general secretaries, in-charge in various states and chief ministers of party-ruled states.

Senior party leaders, including Kamal Nath, Sheila Dikshit, Motilal Vora and Tarun Gogoi filed first set of nominations as proposers for Rahul at the headquarters of All India Congress Committee (AICC) in Delhi.

It is speculated that he will be running unopposed for the post of party President, but the speculations can only be confirmed on Tuesday when the names of contenders will be published after scrutiny of nominations.

If there are no contenders, the AICC will make the final announcement of his name on 11 December – the last date for withdrawal of nomination.

Rahul is set to fill in his mother Sonia Gandhi's shoes, who has been holding the post for nearly two decades.

The elevation comes with a fair share of drama as the Opposition has voiced their lack of confidence in Rahul's ability to hold them together, the way his mother did.

Communist Party of India (Marxist) leader Sitaram Yechury recently said that Rahul cannot replace his mother, Sonia, who was "the glue" that held the Opposition together.

The party itself witnessed a much publicised discord recently, when Congress leader Shehzad Poonawalla alleged that the party's presidential elections were rigged.

Nevertheless, various state units of the party have already expressed their support for Rahul's elevation.

The process of nomination started on Friday, and today is the last date for filing nominations.

Rahul, who became Congress Vice-President in January 2013, will succeed his mother, who is the longest-serving chief of the party, having been at the helm from 1998.