The state government drew flak from all quarters for the lackadaisical and insensitive manner in which the issue was handled by the police. 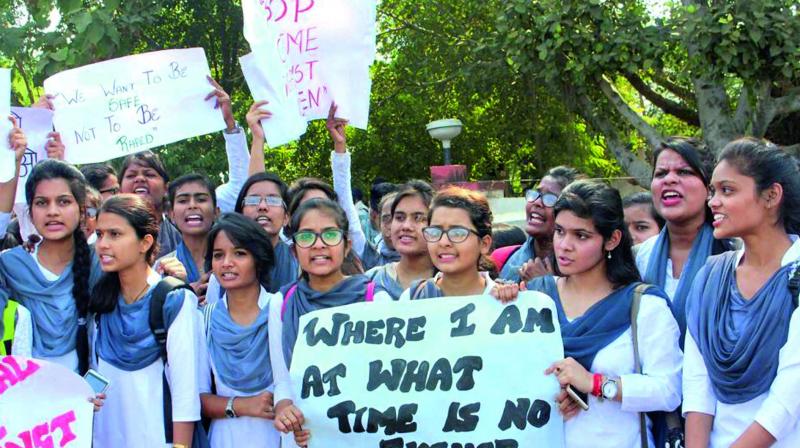 Students take out a rally to protest the gruesome rape of a minor in Bhopal.

Bhopal: A rape is no longer hot news for dailies in Madhya Pradesh. The way they are taking place at regular intervals in recent times has made rape incidents make way for other national and global events in pages of many local newspapers.

But a recent incident of the gangrape of a 19-year-old undergraduate girl student in the heart of Bhopal, has triggered a public outrage forcing the state government to wake from its slumber. The government promptly placed half-a-dozen police personnel under suspension and transferred two IPS officers for dereliction of duty.

The crime was so gruesome that it continued to get highlighted in all local vernacular and English dailies for 10 days, leading chief minister Shivraj Singh Chouhan to declare to bring legislation to send to gallows convicts of rape of minor girls and gang rapes.

The girl was waylaid when she was returning home from her coaching class on October 31 evening by four youths who dragged her to nearby bushes. The accused took turns to rape her for around seven hours, taking small breaks in between to drink chai (tea) and smoke grass-laden cigarettes.

The state government drew flak from all quarters for the lackadaisical and insensitive manner in which the issue was handled by the police.

“We have been receiving complaints of police personnel   tampering with the FIRs lodged by  rape victims. In some cases, it was seen that the investigators were manipulating the FIRs, while writing the complaints for rape victims. The illiterate rape victims simply put signatures on their complaints without knowing that their statements are being manipulated to favour the accused,” Ganga Uike, MP state women commission member, told this newspaper. 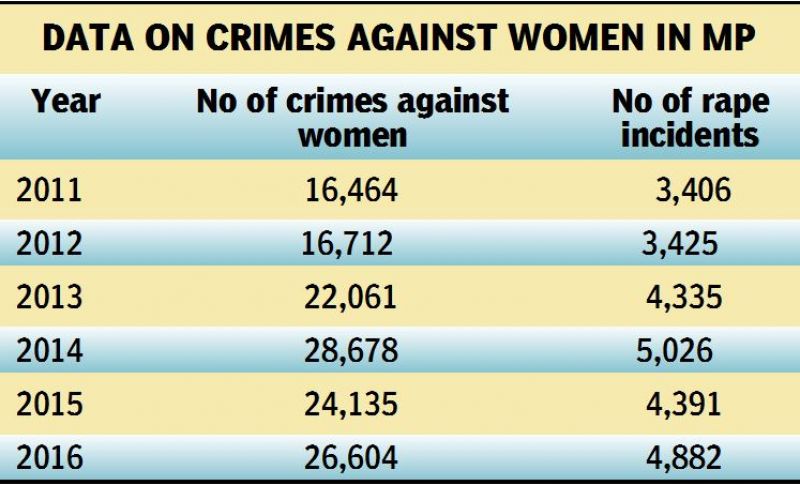 “We have already taken up the issue with the state government for action,” she added.

The incident exposed the indifference and insensitivity of the police towards such victims, she added. No wonder, then, MP has a low conviction rate (a mere 24 to 25 per cent) of total cases of crimes against women, including rape, in the past four years.

A spokesperson of MP police said, “All necessary steps are being taken to sensitise personnel for women’s safety at the institutional level and proper investigation.” In fact, the police had given a commitment in this regard to the MP high court recently. But, according to facts, MP has earned the dubious distinction of recording the highest incidence of rape among all states in the country in 2016.

The latest data on crimes against women released by National Crime Record Bureau has provided a gloomy picture on the safety of women in the state. MP is among top five states in the country, which witnessed highest number of incidents of crime against women in last several years.

“Police has to function more professionally while dealing with cases of crimes against women, particularly rape. It is seen in some cases, rape victims are treated shabbily even in women police stations. Women, who approach the police to get justice for domestic violence and other cases, have often been blamed by the police for being the cause of her own misery. Shockingly, there is no provision of psychological rehabilitation of rape victims by the government for women, particularly those from poor families.

“The UGC recommended all varsities introduce gender sensitivity as a subject in higher education level a couple of years ago. But, the order is yet to be implemented,” Dr Asha Shukla, assistant professor, sociology department, Barkatullah Univer-sity said.

“Rape is a nightmarish experience for the victim. She is not allowed to forget the incident for people ‘blame’ her for the incident,” social activist Rolly Shivare told this newspaper.

“Since MP is a feudal state, its culture is responsible for a lack of gender sensitivity among men, who see a woman as a biological entity. A majority of crimes against women are committed by culprits known to   victims closely,” she said.