Haryana CM in dilemma over Jat quota politics in BJP

The Haryana police and central forces made tight security arrangements around the venue. 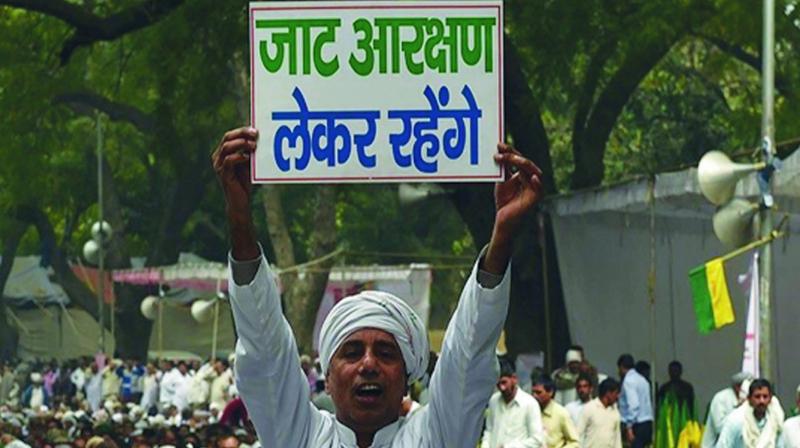 Jat protesters at a rally in Haryana.

Chandigarh: With clouds of stirs by Jat and Saini communities looming large over Haryana, the Manohar Lal Khattar government is faced with another predicament.

BJP MP Raj Kumar Saini has threatened to float a new political party, while Union minister Birender Singh (a Jat) supported the Jat quota cause by attending one of its rallies.

The opposition party, Indian National Lok Dal (INLD) too had lent it support to the Jat’s reservation rally. The Congress so far has chosen to stay away from both the communities. However, the Haryana government cannot afford to stay neutral, especially when leaders from within the party are siding with their communities.

By declaring his keenness to float a political outfit in Haryana, Mr Saini has not only embarrassed the government, but also did not hesitate from projecting himself as the future chief minister at the “Samanta Maha Sammelan” in Jind. He said that he was not against quota being given to any community, but demanded that it should be given on the basis of population and all sections should be covered.

Well known for his opposition to reservation for the politically dominant Jat community in Haryana, Mr Saini said that he will take the decision of forming a separate political outfit in the state before the 2019 general elections.

Projecting himself as a leader of the Other Backward Castes (OBCs), Mr Saini claimed that the OBC community was used by political parties, over the years, only as a vote bank and that the community did not get the justice it deserved.

On the other hand, in the Jat community rally in Jassia near Rohtak, the leaders of All India Jat Aarakshan Sangharsh Samiti (AIJASS) threatened to start a fresh agitation to seek reservation for the community, if their demand for quota was not met by the state government by December-end.

AIJASS leader Yashpal Malik, accused Haryana’s BJP government of going back on its promise of giving reservation to the Jats. He warned the government to meet the Jats’ demands or face another agitation. The rally was attended among others by Union minister and Jat leader Birender Singh and INLD leader Abhay Singh Chautala.

The Haryana police and central forces made tight security arrangements around the venue.

The INLD supported the Jat’s reservation demand.  “As far as I am concerned, the community comes first and then politics,” Mr Chautala said, while addressing the rally. Bashing the chief minister Manohar Lal Khattar and the BJP government for betraying the Jat community,

Mr Chautala said,  “The chief minister says he wants to help Jats, but does nothing to grant reservation or withdraw cases against the Jat youths.”

The Haryana Congress leaders, including former chief minister Bhupinder Singh Hooda, in whose bastion it took place, gave the Jat rally a miss. The function was held to lay foundation stone of an education institute the AIJASS is constructing for the Jat community at Jassia.