Rupkatha Basu takes to Facebook to talk about “the harassment and exploitation” of students and staff. 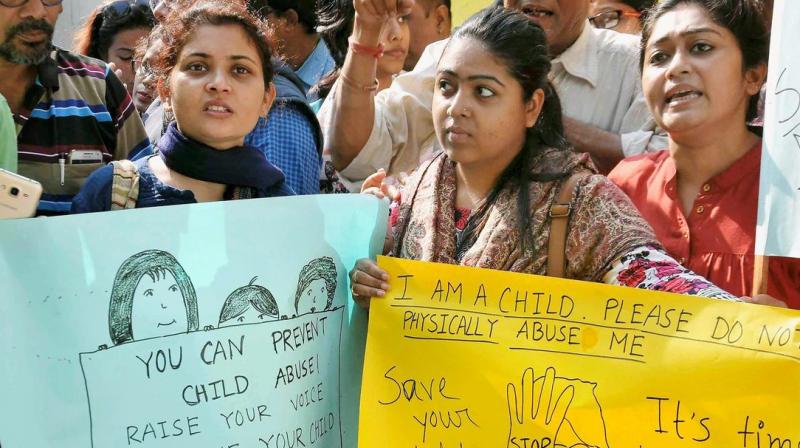 Another ex-student when contacted over phone, said that character assassination of the students was extremely regular, in addition to counsellor-client privacy violation. In picture: Parents of the G D Birla school students protest outside campus. (Photo: PTI)

Ex-student Rupkatha Basu – now studying Psychology in Toronto – mentions in the post - originally shared by her friend Abhishek Mukherjee on her behalf - “the harassment and exploitation” of students and staff alike, perpetrated by the management of the school.

She has brought up how a similar incident had happened three years ago on the same campus, that made students feel unsafe but they were not allowed to protest or speak up against it.

The student, in her post, has said, "The management of GD Birla is an administrative body that believes that stopping the graduating batch from creating customized “batch t-shirts” is a more pressing issue than installing CCTVs in classrooms, or proper locks in all the washroom cubicles."

Incidentally, according to West Bengal Commission for the Protection of Child Rights, Chairperson, Ananya Chakraborty, CCTVs were supposed to be installed three years back.

On being questioned about the same after the recent one, the Principal said it would be done in December.

The ex-student's post also states that ailing or sick students were not given any care, but forced to attend classes. However, the school administration was not bothered by the fact that there were not enough classrooms, she says.

Students were allegedly threatened to "silence by things like ‘your marks will be cut’, ‘your admit card will be withheld’, ‘You will be taken to Manjushree ma’am’”, in case they protested when they were abused, insulted or their character was questioned.

"When I was in class 12, my batchmates and I were screamed at, chased, and threatened with physical assault with a metre ruler, all because we wanted to celebrate the last day of school in the field by making a formation of our school acronym. The stick was swung at the faces of begging, crying and unarmed students, who were, as usual, threatened with ‘dire consequences’," the post read.

The ex-student has accused the GD Birla authorities to be 'wealthy, powerful' people, who will “blackmail and bribe” their way out of the chaos, "just like they always have."

Rupkatha also mentioned in her post that in her fourteen years at the school, she has seen some of the best teachers forced to leave the institution because of mistreatment by the school administration.

Rupkatha has also accused the school administration of being a body that "that recruits vice principals who will point out the colour of your bra in front of a bunch of older boys."

The same concern has been voiced by another ex-student, who when contacted over phone, said that “character assassination” of the students was extremely regular, in addition to counsellor-client privacy violation, as ‘students' personal problems were made topics of tiffin-break conversation'.

G D Birla spokesperson Subhash Mohanty said authorities were grief-stricken at the unfortunate incident and have not had a chance to go through Rupkatha's post. He also said such incidents of abuse are the latest trend, especially against very young children.

Mohanty, however, added that students making claims on Facebook should complain formally to school authorities, for them to take any action.

As for the incident, Mohanty said that if the crime was proven, the accused would be punished. But keeping in mind the safety of 4000 students, the school will no longer hire external Physical Training teachers.

When contacted, Rupkatha said while the anguish of the parents is understandable, 'our innocent senior teachers are being harassed for no reason and it is extremely unfair. People need to protest where the fault lies.'

Two teachers of the school have recently been accused of sexually abusing a four years old student.

The school authorities had earlier denied all allegations, terming the incident 'a small mischief'.

The concerned teachers were sacked on Sunday, according to a statement from the school.