Assembly polls in Tripura and Meghalaya are due in February next year. 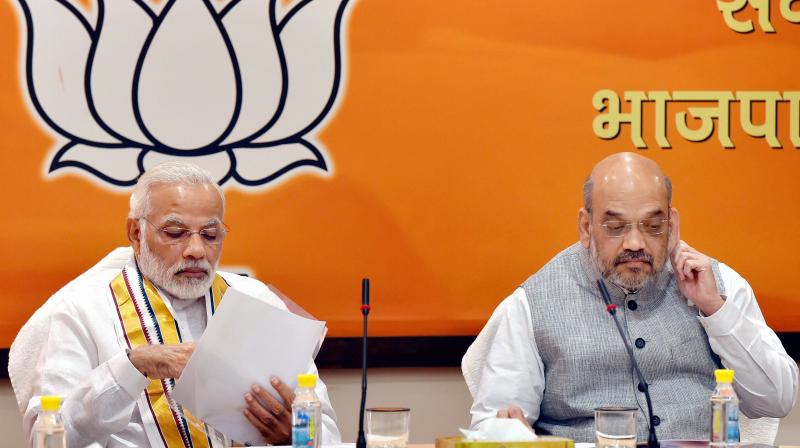 New Delhi: After wrapping up the election campaign in Gujarat, BJP leadership will focus on the Northeastern states going to polls early next year. While BJP president Amit Shah is likely to address rallies in Tripura and Meghalaya later this month, Prime Minister Narendra Modi is also expected to visit the two poll going states next month. Assembly polls in Tripura and Meghalaya are due in February next year.

Nagaland will also go to poll around the same time.  In Tripura, where the BJP wants to end the CPI(M)’s 25-year rule, Central government’s welfare schemes, including  Pradhan Mantri Ujjwala Yojana, are going to be the main poll plank along with “Left’s terror regime.” Tripura BJP unit chief Biplab Kumar Deb said that over 3.33 lakh poor women have been given free LPG connections under the Pradhan Mantri Ujjwala Yojana. This means more than half of the total 25 lakh voters in the state have benefited from it, supposing that one family has on an average four members, he adds. “The success of the Central government’s welfare schemes such as Ujjwala will be one of our key planks. Our another plank is the Left’s reign of fear. People are with us,” he told a news agency, expressing confidence that his party would form its first ever government in the state next year.

Known in the political circle as “Mr Clean,” chief minister Manik Sarkar has been at the helm for 19 years. Tripura’s Left Front government is credited by many with ushering in an era of peace following a long spell of insurgency.

However, the BJP leader attributed this positive perception about Mr Sarkar’s standing to “clever marketing”, arguing that a “principal must be judged by his school’s performance and not how he appears.”

Mr Deb claimed that cases of atrocities against women is huge and the state’s unemployment rate stands at 20 per cent, the highest in the country. He also said that 67 per cent of the people are below the poverty line and accused the Left Front government of unleashing violence against its political rivals.

Tripura has also benefited a lot from the rural employment guarantee scheme MNREGA and it was largely due to the efforts of the Modi government, he said.

He alleges that the central government has been paying its 90 per cent of the share of Rs 177 wage per day per person, while the state has failed to give the remainder 10 per cent.

The BJP did not win a single seat in the 60-member assembly in the last polls in 2013, but its high-voltage political campaign in the state since Mr Shah took over as the party president in 2014 and desertion from the opposition Congress and TMC ranks to its fold have boosted its presence in the tiny northeastern state.

Several Congress MLAs, who had won on anti-Left platform, first joined the TMC after their party joined hands with the Left in West Bengal and then they switched over to the BJP after the Mamata Banerjee-led outfit too was seen getting cozying up to the idea of a larger anti-BJP alliance.

Mr Deb said that the BJP was the number two party in all the assembly bypolls and local elections in the state behind the Left as he ruled out any alliance, and said the BJP would field candidates in all 60 seats.

“Congress and TMC are finished. It will be a straight fight between the Left and us,” he said.