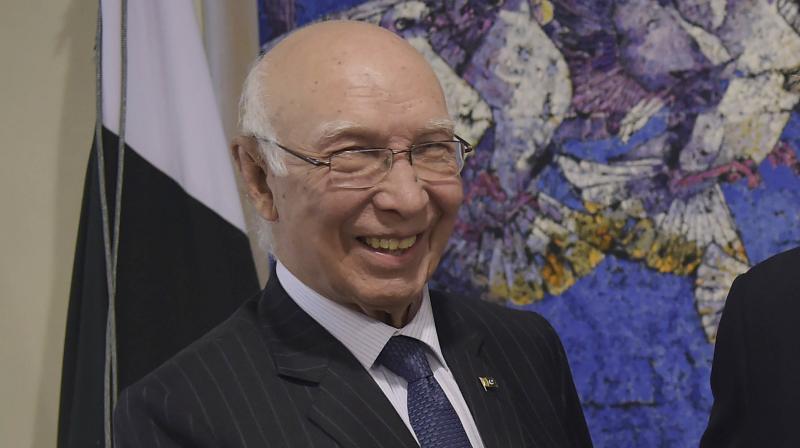 New Delhi: In a move that indicates Pakistan’s push for talks to break the ice with India amid border tensions and terror attacks in Jammu & Kashmir by Pakistan-backed militants, Pakistan PM’s advisor on foreign affairs Sartaj Aziz advanced his travel plans and reached Amritsar shortly after 7 pm on Saturday by a special flight for the two-day Heart of Asia Summit on Afghanistan that began on Saturday there with official-level talks. Mr Aziz, who was initially supposed to reach Amritsar only on Sunday, attended a dinner where he exchanged pleasentaries with Prime Minister Narendra Modi. With speculation rife on whether the two countries will have bilateral talks on the sidelines of the conclave, Mr Aziz is again expected to meet PM Modi on Sunday when his delegation calls on PM Modi as per protocol.

Mr Ghani and Mr Modi also offered prayers at the temple. Mr Modi also served langar in the community kitchen of the shrine as Mr Ghani stayed with him.

In a goodwill gesture on Saturday evening, Mr Aziz sent a bouquet to external affairs minister Sushma Swaraj extending his “sincere good wishes for her full and speedy recovery” from illness. Ms Swaraj, undergoing treatment for renal failure, is not attending the Heart of Asia conference and finance minister Arun Jaitley is heading the Indian delegation at the ministerial deliberations. Sunday will be the main day of the summit. The agenda of this international summit will include tackling the terror threat and with India and Afghanistan leading diplomatic efforts to corner Pakistan on this. The “Amritsar Declaration” that will be adopted on Sunday is expected to have a strong focus on the issue of terrorism and safe havens that unfortunately still exist for terrorists. Both New Delhi and Kabul are furious over cross-border terror attacks on their respective soil by Pakistan-backed terrorists.

Mr Aziz, leading the Pakistani delegation to the meeting of the Heart of Asia, was received at the Amritsar airport by Pakistan high commissioner Abdul Basit. Pakistan and India had held a meeting during last year’s Heart of Asia Summit in Islamabad during which both countries had agreed to start a “comprehensive bilateral dialogue” that was to cover all outstanding issues. The resumption of the dialogue could, however, not take place due to the Pathankot terror attack in January.

Earlier this week, Mr Basit had said Pakistan was ready for unconditional resumption of dialogue if India was ready. India, however, already made it clear that it would never accept continuing cross-border terrorism as the “new normal” in bilateral ties with Pakistan, while making it clear that talks cannot take place in an atmosphere of “continued terror”.

The tensions between the two countries escalated after the cross-border terror attack on an army base in Nagrota. India will step up its drive to corner Pakistan diplomatically and is set to mobilise support for concrete action against state-sponsored terror at the two-day conference.

Afghanistan, which has also been witnessing increased attacks from terror groups operating from Pakistani soil, is set to push hard for a regional counter-terror framework with “binding” commitment during the conference, a platform set up to assist the war-ravaged country in its transition.

As Afghanistan faces the resurgence of Taliban, the Heart of Asia conference of major regional and global powers began in the holy city to explore ways to effectively deal with the threat of terrorism in the region.

Being attended by representatives of several countries and leading groupings like the European Union, the annual conference of the Heart of Asia-Istanbul Process is deliberating on various challenges facing Afghanistan, including revival of a peace process in the conflict-ridden country.

On Saturday, senior officials of various countries, including India, China, Russia, Iran and Pakistan, and representatives of 17 supporting nations were deliberating on a vast range of issues facing the region including its complex security scenario and dealing with the threat of terrorism, radicalisation and extremism.

Issues like enhancing Afghanistan’s connectivity with South and Central Asian countries to boost trade were being discussed at the senior officials’ meeting which was co-chaired by India’s Foreign Secretary S Jaishankar and Deputy Foreign Minister of Afghanistan Hikmat Khaleel Karzai.

The meeting is finalising the text for tomorrow’s Ministerial Conference and is also deliberating on its Declaration which will have substantial portion on terrorism.