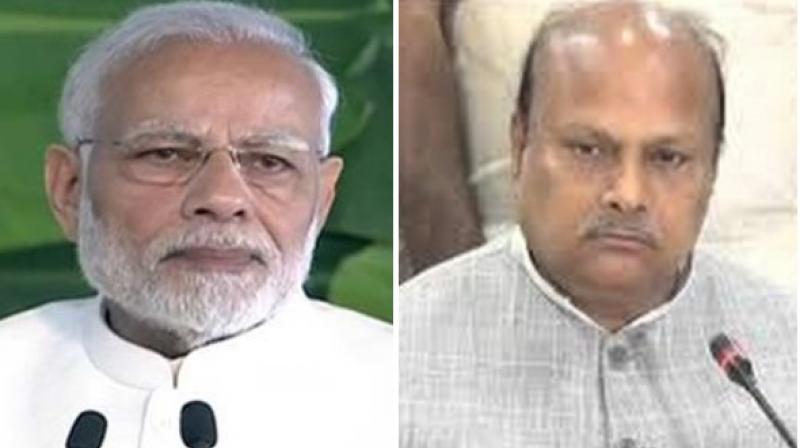 'Who is a bigger anaconda than (Prime Minister) Narendra Modi. He himself is the anaconda, who swallowed all the institutions like CBI, RBI etc,' Yanamala Ramakrishnudu claimed. (Photo: ANI)

Amaravati: Launching a scathing attack at Prime Minister Narendra Modi, Andhra Pradesh Finance Minister Yanamala Ramakrishnudu said the Prime Minister is an 'anaconda' who is swallowing up institutions like the Central Bureau of Investigation (CBI) and Reserve Bank of India (RBI), among others.

"Who is a bigger anaconda than (Prime Minister) Narendra Modi. He himself is the anaconda, who swallowed all the institutions. He is swallowing up institutions like CBI, RBI etc. Andhra Pradesh Bharatiya Janata Party (BJP) leaders should know this," he claimed.

"Every Tom, Dick, and Harry is speaking of past politics. Past cannot be present or future. But present and future will become past. The critics of TDP should understand this truth. TDP was not established against any single party. It was found against the system. Late NTR had founded TDP to fight dictatorship and hegemony. TDP was found for the security of marginal and downtrodden and for empowering minorities," he added.

"BJP leaders, Narendra Modi, and Amit Shah are violating the constitution and democracy. In such a situation is it not the responsibility of all of us as the citizens of India to face BJP and counter PM Modi's dictatorial policies? Instead of that why YSR Congress Party (YSRCP) and Jai Samaikyandhra Party (JSP) are criticising TDP in the same tune? Is it not irresponsibility and anti-constitutional?" he asked.

The Andhra Pradesh minister further claimed that the TDP has been playing a key role in national politics whenever needed from day one of its formation.

"We did the same in National Front and United Front. TDP has a greater responsibility towards the nation. That's why it cannot sit idle as a mute spectator when the safety of the nation is in trouble, democracy is in problems and constitution is in crises. YSRCP and JSP want to grab power but have no responsibilities towards the nation. For the same, they are supporting Narendra Modi, who is demolishing the systems and killing democracy," he said.

"TDP was formed for the interests of the state of Andhra Pradesh. It was founded for creating a new political era by encouraging youth, educated and truthful people into politics. TDP has been working in the same direction since last 36 years. Our call for self-respect brought worldwide identity for us. People stopped calling us 'Madrasis' and started identifying as Telugu people," added Ramakrishnudu.

In response to the state finance minister's comments, Union Minister for Minority Affairs Mukhtar Abbas Naqvi asserted that PM Modi's critics do not have the courage to review the work done by him.

"There is a competition going on in abusing popular and hardworking Prime Minister like Narendra Modi. People are not feeling ashamed of using bad words. However, if we see the history, PM Modi has always stood strong whenever somebody attacked him. These people, who are abusing him, also know this. They don't have the courage to review the works done by the Prime Minister," he told news agency ANI.

Ties between the TDP and BJP have been strained ever since the Chandrababu Naidu-led party pulled out of the National Democratic Alliance (NDA) alleging that the BJP-led central government had betrayed the people of Andhra Pradesh by not granting special category status to the state.