Eight people were killed on Sunday as violence erupted during a farmers' protest, claiming the lives of both farmers and BJP workers 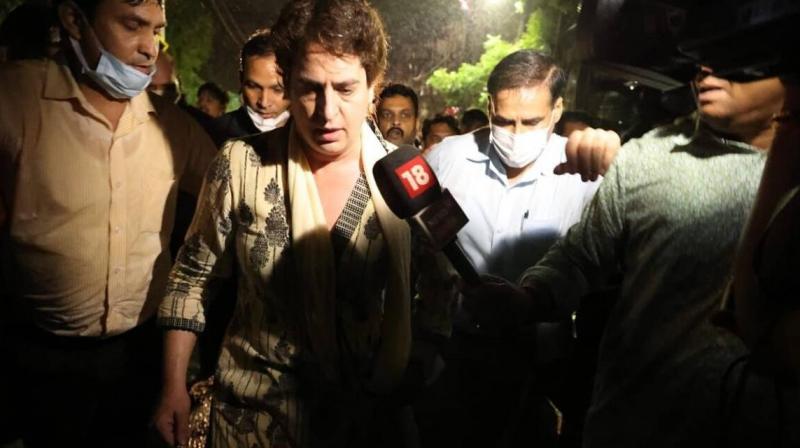 The Congress leaders had to take alternative routes to reach the bordering Hargaon area in Sitapur as heavy security was deployed on the main roads amid tension in the violence-hit region of Lakhimpur. (Twitter@INCIndia)

Lucknow/Lakhimpur Kheri: Congress general secretary Priyanka Gandhi Vadra and other party leaders were detained in Sitapur on Monday, with the party alleging they were not allowed to meet the victims of the violence that erupted during a farmers' protest in Lakhimpur Kheri a day earlier.

Stopping them in such a way is "undemocratic", Congress state President Ajay Kumar Lallu told PTI.

Eight people were killed on Sunday as violence erupted during a farmers' protest, claiming the lives of both farmers and BJP workers ahead of a visit to Lakhimpur by Uttar Pradesh Deputy Chief Minister Keshav Prasad Maurya.

"Priyanka Gandhi, Deepender Singh Hooda and other leaders were detained in Sitapur around 5 am," Lallu said.

The Congress leaders had to take alternative routes to reach the bordering Hargaon area in Sitapur as heavy security was deployed on the main roads amid tension in the violence-hit region of Lakhimpur.

"We are waiting outside Lakhimpur Kheri. We have been prevented by the police from entering. We have come here to meet the victims of the violence," Congress national secretary Dheeraj Gurjar told PTI over the phone at 4.30 am.

Gandhi's convoy was earlier briefly stopped by Uttar Pradesh Police officials in Lucknow, where the Congress general secretary had arrived on Sunday night, within a few hours of violence being reported during an anti-farm laws protest here.

Demanding a judicial probe in the violence, BSP supremo Mayawati said her party's national general secretary Satish Chandra Mishra was stopped in Lucknow to prevent him from reaching Lakhimpur.

"BSP's national general secretary and Rajya Sabha MP S C Mishra was placed under house arrest late last night at his residence in Lucknow. It is continuing so that the party delegation under his leadership cannot reach Lakhimpur Kheri to get the correct report of the violence. This is very sad and deplorable," Mayawati said in a tweet in Hindi.

"Due to the involvement of two BJP ministers in the Kheri case, a proper government investigation of this incident, justice to the victims and strict punishment to the guilty does not seem possible. Therefore, this incident in which eight people have been confirmed dead so far requires a judicial inquiry. This is the demand of the BSP," she said.

Meanwhile, security has been beefed up outside the residence of Samajwadi Party supremo Akhilesh Yadav, who had announced that he would visit Lakhimpur.

A large police force has been deployed on Vikramaditya Marg, and police trucks have been placed to block the entire road and restrict any possible movement.

Mobile internet services have been suspended in parts of the violence-hit Lakhimpur district, where restrictions under CrPC section 144 -- which prohibits assembly of four or more people -- has also been imposed, according to officials.

The UP Police took to Twitter early Monday to describe the incident as "unfortunate" and said eight casualties have been reported so far as per the district administration.

"ADG LO, ACS Agriculture, IG Range & Commissioner are on the spot & situation is under control. Adequate deployment has been done to prevent any untoward incident," it added.