Russian President Vladimir Putin, who is on two-day visit to India, will hold annual bilateral summit with PM Narendra Modi. 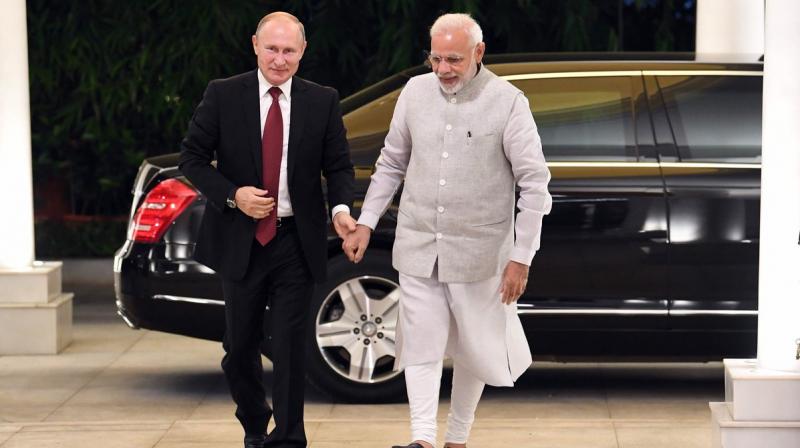 PM Modi and Russian president Vladimir Putin are expected to review bilateral defence cooperation in the wake of the US sanctions against Russian defence majors. (Photo: Twitter | @narendramodi)

Putin, who is accompanied by a high-level delegation, was received by External Affairs Minister Sushma Swaraj.

Prime Minister Narendra Modi took to Twitter and welcomed President Putin to India and said, "Looking forward to our deliberations, which will further enhance India-Russia friendship."

The 19th India-Russia Annual Bilateral Summit will take place in Delhi on Friday during which PM Modi and Russian president Vladimir Putin are expected to review bilateral defence cooperation in the wake of the US sanctions against Russian defence majors.

The two leaders are also likely to deliberate on key regional and global issues, including US sanctions on import of Iranian crude oil.

The focus during the visit will be on the S-400 Triumf air defence missile system agreement, with a top Kremlin aide saying Tuesday that Russian President Putin will oversee the signing of the USD 5 billion deal.

#WATCH: Russian President #VladimirPutin meets Prime Minister Narendra Modi in Delhi. He is on a two-day visit to India. pic.twitter.com/HlvfOGsEcQ