Rajiv Gandhi University of Health Sciences has directed students not to write sacred symbols, names of Gods on answer sheets. 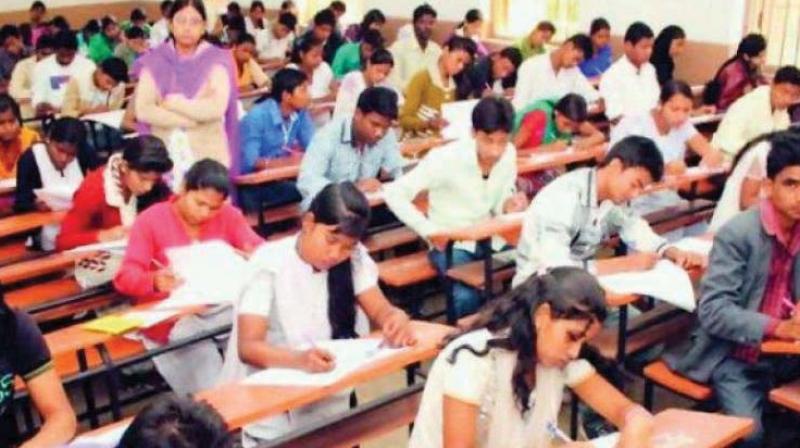 Writing one's name, PTO at end of a page, irrelevant messages, numbers or sentences, signs, symbols, letter or word and tampering with answer books would also be treated as a malpractice. (Representational Image)

Bengaluru: Seeking divine intervention in trying times is not unusual and cracking an examination could be one of those. However, the Rajiv Gandhi University of Health Sciences in Karnataka has not taken kindly to students making godly pleadings on answer sheets.

With quite a few examinees writing 'Om', a sacred symbol in Hinduism or the names of Gods before attempting to answer questions, the university has in a circular to all affiliated colleges called it an examination malpractice.

The first among the eight "don'ts" mentioned in the October 1 circular issued by Registrar (Evaluation) Dr M K Ramesh is the direction on the mention of the names of Gods. "Do not write any word/sentence - starting from page 03 like names of Gods of your faith etc.," reads the first "don't".

Writing one's name, PTO at the end of a page, irrelevant messages, numbers or sentences, signs, symbols, letter or word and tampering with answer books would also be construed as revealing the identity of the examinee and will be treated as a malpractice, it says.

Sandhya Avadhani, deputy director (pre-exam), at the university said some students try to reveal their identity to the evaluators. "These directions have been issued to ensure the identity of students taking an exam is not revealed to evaluators," she said.

Avadhani said some examinees might be doing it unintentionally but many resort to it with the intention that when they approach an evaluator for more marks they could identify them with those signs and symbols. "It's an indication indirectly," she said.

The university official said such instructions have already been in place and the circular is only a reiteration so the students, invigilators and college managements know these exist. "From time to time we need to keep telling people because each year new students join," said Avadhani.