Flight operations at Srinagar airport were suspended for three hours during the operation. 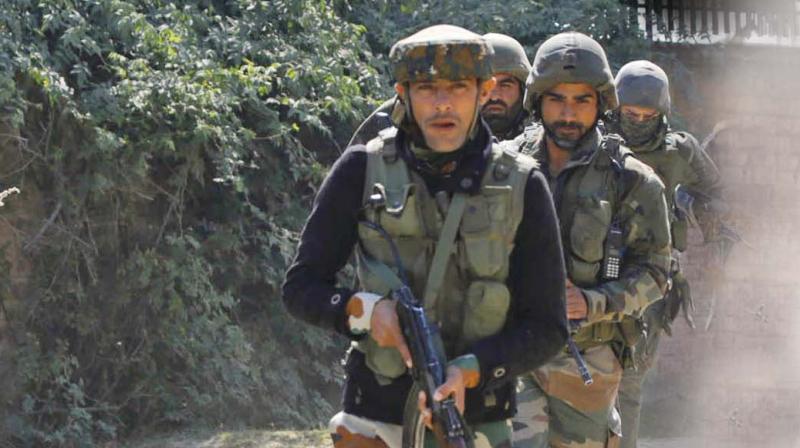 Srinagar: In a pre-dawn fidayeen attack on Tuesday, three Jaish-e-Muhammad (JeM) militants stormed a Border Security Force (BSF) base near Srinagar Airport, killing a BSF ASI and injuring four others before being shot dead by the security forces in a 10-hour-long encounter.

The heavily armed militants, dressed in combat fatigues, drove to the main entrance of the BSF 182 Battalion base at Humhama in Budgam district at about 4.30 am, possibly from neighbouring Friends (residential) Colony by cutting the fence, police sources said.

They first hurled hand grenades towards the sentry post and then fired from  automatic weapons to force their entry into the campus, they said.

One of the attacker was killed when the BSF sentry retaliated, while the other two entered barrack number 7 and then moved to other buildings, they said.

BSF assistant sub-inspector B.K. Yadav, 50, was killed and four others, including a J&K policeman, were injured during the standoff that ended around 2.30 pm with the killing of the remaining two militants, they said.

Flight operations at Srinagar airport were suspended for three hours during the operation.

A CRPF official said during the operation one of the attacker pretended to be a soldier and fired in the same direction as the security forces until he was spotted and killed.

The area where the attack took place falls in the central district of Budgam which is considered “most secured”. Apart from the civlian airport and Air Force station, bases of other security forces, including the CRPF, are also present in the zone.

Soon after the attack, JeM claimed responsibility. It said its “Afzal Guru squad” had carried out the attack.

Inspector general of J&K police Munir Ahmed Khan confirmed the JeM’s involvement. “No doubt, the terrorists were from JeM,” he said.

“Undoubtedly, the JeM is a threat. Its cadres believe in these kind of acts — attacking camps and doing sensational things,” he said.

Mr Khan said that an alleged aide of the BSF camp attackers who drove them to the area had been identified. Security officials termed their retaliatory operation as the “quickest possible” end to the terror attack by militants “who had planned to engage us for a longer period” than it turned out to be.

“Had we used the airpower, the operation would have finished much earlier but we decided not to do so to avoid civilian casualties as the BSF base is close to residential areas,” said an official. Soon after the attack, the Army’s 53 Rajput Rifles, the BSF, J&K police’s counter- insurgency Special Operations Group (SOG) and the Central Reserve Police Force (CRPF) collectively launched the operation to flush out the militants. Union home minister Rajnath Singh held a high-level meeting in New Delhi to review the situation in the attack.