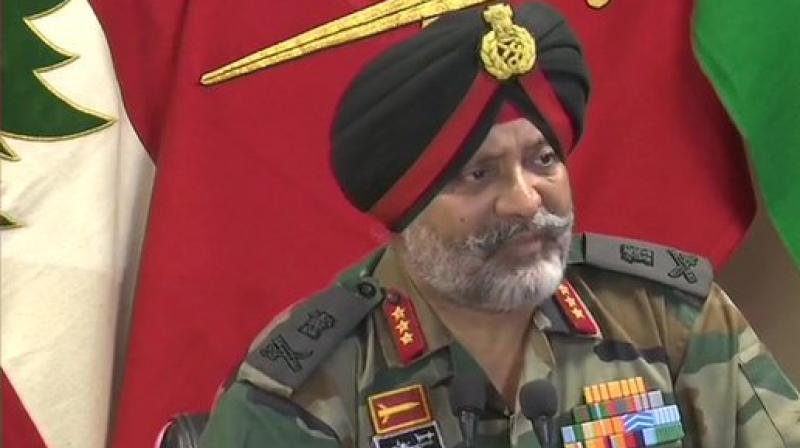 Dhillon further said that Pakistan is desperate to infiltrate maximum terrorists into the Kashmir Valley to disrupt peace. (Photo: ANI)

#WATCH SRINAGAR: Indian Army releases confession video of two Pakistani nationals, who are associated with Lashkar-e-Taiba, and were apprehended on August 21. #JammuAndKashmir pic.twitter.com/J57U3uPZBl

Dhillon further said that Pakistan is desperate to infiltrate maximum terrorists into the Kashmir Valley to disrupt peace.

There were earlier reports that after government's decision to read down Article 370, Islamabad had hurriedly reactivated nearly a dozen terror camps in Pakistan occupied Kashmir (PoK).

Soon after the Centre's decision, hectic movement of terrorists around these camps was observed and Indian security forces were put on high alert.

Terror camps in Kotli, Rawalkot, Bagh, and Muzzafrabad in PoK area were almost inactive in the wake of the May 2019 deadline by the international body, Financial Action Task Force (FATF) which asked Pakistan to curb terror financing.

Stirring a controversy on August 6, 2019, Pakistan Prime Minister Imran Khan said the Indian government's decision to scrap Article 370 would lead to another Pulwama type incident and Pakistan would not be responsible for it.

"Through this move... they (the BJP) are trying to crush the people of Kashmir, as a result of which a Pulwama type incident will happen. I can predict that" Khan said in his speech during a joint session of Parliament, shared on ARY News' YouTube channel.

Imran Khan's statement virtually gave permission to terror outfits such as Jaish-e-Mohammed (JeM) and Lashkar-e-Taiba (LeT) and their handlers in Inter-Services Intelligence (ISI) agency of Pakistan, to reactivate training camps and launch pads, the IANS reported.

Intelligence reports have revealed that more than 150 cadres of JeM, LeT and veteran Taliban have reportedly assembled at Fagoosh and Kund camps near Kotli and Shavai Nallah, Abdullah Bin Masud camps in Muzaffarabad area.

In the meeting, Doval discussed strategies to tackle any threat coming from across the border in the backdrop of the government's bold decision to bury Article 370 and bifurcate state of Jammu and Kashmir into two Union Territories.

According to sources, a few outfits of fidayeen of JeM and LeT infiltrated into Kashmir during the cross-border shelling during the past fortnight.

Indian security officials have placed various strategies into action to neutralize these groups.

Terror outfits have continued to train their personnel inside and outside PoK, apart from LoC. In Khyber Pakhtunkhwa area, veteran Taliban cadres have a stronghold.

After sanctions by FATF, several terror camps in Pakistan reduced significantly. However, many terror factories are still operative on their soil.

Intelligence agencies have given a list of operational and non-operational terror camps to Indian security forces, sources said.