Immediately after his arrest, protests broke out in his Kanakapura Assembly constituency with supporters pelting stones at some buses. 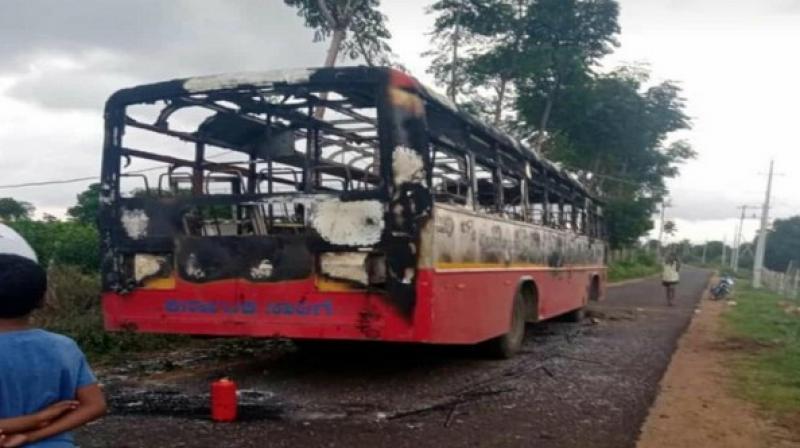 On Wednesday, supporters of Shivakumar set a bus on fire and blocked parts of the Bengaluru-Mysuru highway, forcing the Karnataka State Road Transport Corporation to divert traffic from the arterial road. (Photo: ANI)

Bengaluru: Congress workers in Karnataka on Wednesday protested against the arrest of former minister DK Shivakumar by the Enforcement Directorate in New Delhi late on Tuesday in a money laundering case.

Immediately after his arrest, protests broke out in his Kanakapura Assembly constituency with supporters pelting stones at some buses plying on the way to Mysuru.

On Wednesday, supporters of Shivakumar set a bus on fire and blocked parts of the Bengaluru-Mysuru highway, forcing the Karnataka State Road Transport Corporation to divert traffic from the arterial road.

The protesters blocked the Ijoor Circle in Ramanagara town on the outskirts of the state capital. Kanakapura constituency falls within the Ramanagara district.

Minutes after his arrest, Shivakumar tweeted, “I congratulate my BJP friends for finally being successful in their mission of arresting me. The IT [income tax] and ED cases against me are politically motivated and I am a victim of BJP’s politics of vengeance and vendetta.”

Shivakumar received support from many quarters, including from chief minister BS Yediyurappa.

Read | Arrest of Shivakumar didn't bring any happiness, hope he is out soon: Yeddy

Youth Congress President, Srinivas BV has alleged that Shivakumar's health has deteriorated because of the harassment that the Congress leader has been subjected to in the last few days.

"His health has deteriorated due to the harassment he has been subjected to. Doctors have advised him to rest but Enforcement Directorate (ED) is trying to take him away," Srinivas told ANI after meeting Shivakumar at the Ram Manohar Lohia (RML) hospital in Delhi.

On August 29, the Karnataka High Court had dismissed Shivakumar's petition challenging the summons issued by the ED in December 2018.

Later, he was summoned by the law enforcement agency under the Prevention of Money Laundering Act (PMLA) and was asked to appear before it on August 30, following which he was interrogated for four days.

The 57-year-old leader had earlier asserted that he has not done anything wrong and will fully cooperate with the investigating agency.

"It is all a conspiracy. I have not made any mistake, murder or indulged in corruption. The money you found is my money and I earned it," he had said.