India   All India  04 Sep 2017  At last, screws being tightened on terrorists and traitors in J&K Valley
India, All India

At last, screws being tightened on terrorists and traitors in J&K Valley

Watali in connection with a case pertaining to terror funding and separatist activities in Jammu & Kashmir. 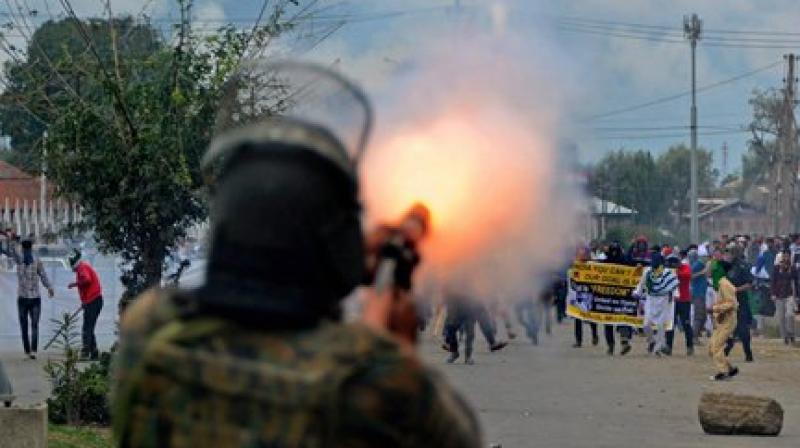 A policeman fires teargas shells to disperse protesters during a clash, which erupted after Id prayers, in Srinagar. (Photo: PTI)

Some days ago, an Army Goodwill School was renamed Shaheed Lt. Umer Fayaz. Goodwill School to honour the young Army officer who was abducted and shot dead by militants in Shopian district in May this year, where he had gone to attend the wedding ceremony of a relative.

Few days later, Lt. Gen. J.S. Sandhu, GoC 15 Corps, said, “Persons involved in killing of Lt. Fayaz have been identified and we are on their trail.” On 01 September, receiving specific inputs, a joint team of Kulgam police and 62 Rashtriya Rifles laid an ambush to trap a group of terrorists at in Tantray Pora village of Kulgam district. Responding to the heavy hail of fire from this group trying to escape, a Kashmiri terrorist identified as Ishfaq Ahmad Padder, the killer of Lt. Umer Fayaz, was killed.

Having joined the Lashkar-e-Tayyaba (LeT) earlier, Padder was also involved in robberies of J&K Bank and Ellaquai Dehati Bank at Kader.

Pani said many police families have suffered and undergone irreparable trauma defending the common good of the society and also questioned the silence of the separatists and their intellectual cronies over the killing.

Hizbul Mujahideen (HM) boss Syed Salahuddin has named Mohammad Bin Qasim as its new commander in Kashmir following the recent killing of Yasin Itoo, whose loss has dealt a big blow to HM at a time when its former leader Zakir Musa has announced a breakaway group, Ansar Ghazwat-ul- Hind, an Al Qaeda affiliate in Kashmir.

While police sources reportedly said that they had not heard of anyone named Mohammad Bin Qasim in the current lot of HM terrorists, there is speculation that it could well be Riyaz Naikoo, 27, an active HM “divisional commander” in south Kashmir, a resident of Awantipora, Pulwama district, who joined the outfit in 2012.

Personnel of Army and central armed police forces (CAPF) martyred in 2016 were 61 and 35, whereas in 2017, there have been 40 and 18. About 1,00,000 Army and CAPF personnel were deployed for vigil over the Amarnath yatra for almost 3,00,000 pilgrims, which can be considered to have been successfully conducted. The dastardly terrorist attack on a bus on July 11, 2017, killing seven Gujarati women and children and injuring 19 others, succeeded only because that bus did not join the protected convoy.

Despite the desperation of Pakistan Army/Inter Services Intelligence (ISI), the successes of Indian Army and other security forces have come about mainly through reliable and timely human intelligence. The same populace subjected to radicalisation appear to be disgusted and have been readily sharing information of the whereabouts of terrorists. At long last, New Delhi began tightening the screws on the Valley’s traitors. On August 17, the National Investigation Agency (NIA), arrested Zahoor Ahmad Shah

Watali in connection with a case pertaining to terror funding and separatist activities in Jammu & Kashmir. His arrest followed searches conducted by the NIA on August 16, 2017, at multiple locations in Srinagar, Handwara, Kupwara and Baramulla, belonging to his relatives and employees. The searches unearthed highly incriminating material pertaining to receipt of funds by Mr Watali from foreign sources and its further distribution to the terrorists and separatists in Kashmir valley for anti-India activities.

Earlier, on June 3, 2017, the NIA had searched Mr Watali’s house in Srinagar and seized incriminating documents pertaining to several financial transactions and land deals. The property documents seized have shown huge amount of cash transactions in sale and purchase. Mr Watali is suspected of acting as a conduit for illegally remitting funds to the secessionists, terrorists and stone-pelters.

On July 24, 2017, Altaf Ahmed Shah, the son-in- law of hardline separatist leader Syed Ali Shah Geelani, was arrested along with six more separatists by the NIA in connection with its probe into the funding of terror and subversive activities in the Kashmir valley.

Mr Shah, popularly known as Altaf Fantoosh and perceived as an influential force in the Tehrek-e- Hurriyat (TeH), was in the custody of police, who had put him in preventive detention immediately after Id.

Also nabbed were Mr Geelani’s close aides, (TeH) spokesman Ayaz Akbar and Peer Saifullah, and  Shahid-ul- Islam, spokesman of the “moderate” Hurriyat Conference led by Mirwaiz Umer Farooq. The others who were arrested included Mehrajuddin Kalwal and Farooq Ahmed Dar alias Bitta Karate. The houses of those arrested had been raided by NIA, which had recovered account books, Rs 2 crore in cash and letterheads of banned terror groups, including LeT and HM. On August 26, 2017, the NIA had summoned Jammu &Kashmir Liberation Front (JKLF) leader Noor Muhammad Kalwal, a close aide of JKLF chief Yaseen Malik who was one of the five militants released after the abduction of then union home minister Mufti Mohammad Sayeed’s daughter in 1989.

On August 28, 2017, the NIA questioned Naeem and Naseem Geelani, sons of Mr Geelani, for seven hours as part of its ongoing probe into terror funding by Pakistan-based terrorist groups to stoke unrest in the Kashmir valley.

This was the second time in a fortnight that the NIA grilled Mr Geelani’s sons. Mr Naeem, a doctor, is seen as Mr Geelani’s natural heir while Mr Naseem, the younger son, works at an agricultural university in Srinagar. Beside Mr Geelani’s sons, Ghulam Nabi Bhatt, a separatist leader, was also questioned.

The NIA investigation also seeks to identify the network of those financing terrorist activities, including those who mastermind stone-pelting at security forces, burning down of schools and damaging government establishments.

For the first time since the rise of terrorism in Kashmir in the early 1990s, a Central probe agency carried out raids to detect the funding of separatists. The NIA alleges that they have been receiving money from terrorist leaders in Pakistan, including Hafiz Saeed who heads the banned LeT and Jamaat-ud- Dawa. Terrorism in the Kashmir valley can only be curbed completely by nabbing all the separatists, neutralising their network and keeping them away from the region.