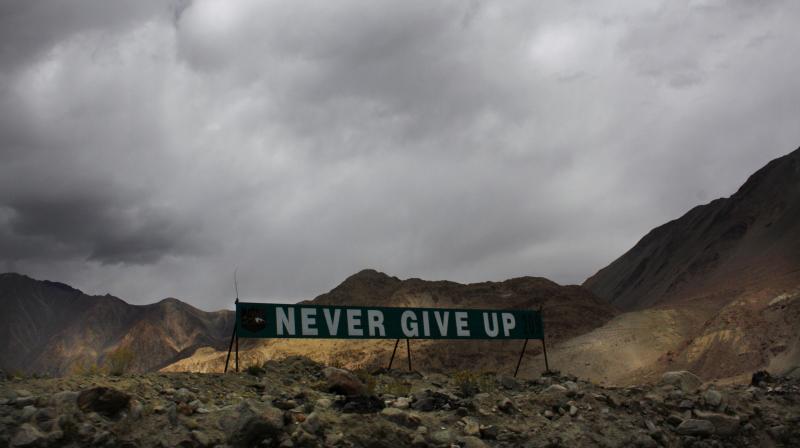 In this Sept. 14, 2017, file photo, a banner erected by the Indian army stands near Pangong Tso lake near the India-China border in Ladakh area. The focus now is on disengaging troops from Hot Springs, Gogra and Depsang areas. (AP/Manish Swarup, File)

New Delhi: India and China could soon reach a final agreement on disengagement from another friction point -- Gogra Post in Ladakh. At the 12th round of the corps commanders’ talks on Saturday, at Moldo on the Chinese side of the Line of Actual Control, there was a detailed discussion on the disengagement of troops from Gogra Post.

“The Chinese commanders will speak to their leadership on the troops’ disengagement from Gogra Post and then respond to us. We are awaiting a final response from the Chinese which can come in a day or two,” said one source. If Chinese leadership agrees, the disengagement from Gogra Post will be announced, he said, adding that there is even a possibility that the announcement might be made in Parliament.

Gogra Post will be the third friction point after the Galwan Valley and Pangong Tso in eastern Ladakh, where disengagement between the two armies will be reached. There will be a buffer zone in Gogra where the troops from both sides will not be allowed to patrol for some time.

In February, India and China had reached an agreement to disengage from the north and south banks of Pangong Tso to pre-standoff status.

Meanwhile, a new video of the deadly June 2020 Galwan clash between the Indian and PLA troops has emerged in the Chinese media. The highly doctored propaganda video is part of the interview of the families of the Chinese soldiers killed during the clash. The Chinese troops can be seen in the video throwing stones from a mountain on the Indian soldiers. The soldiers of both sides are also seen pushing each other on the rocky banks of the Galwan River. There is also footage of Chinese soldiers nearly drowning in the icy and fast-flowing Galwan river during the night and struggling to save each other from being swept away by its flow.