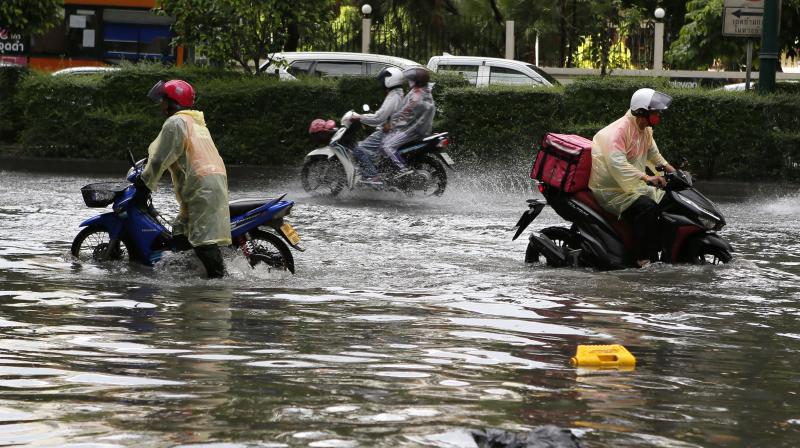 Heavy to very heavy rains in Mumbai for next 48 hours. (PTI Photo)

Mumbai: The India Meteorological Department issued a red alert for Mumbai, Thane, Pune, Raigad and Ratnagiri districts in Maharashtra for Tuesday after upgrading its earlier rain forecast from “heavy-very heavy” to “extremely heavy”.

An IMD official informed that the rest of Maharashtra was very likely to get rain and thundershowers in isolated places during this period. He said the “extremely heavy” forecast means Mumbai, Raigad, Thane, Pune and Ratnagiri may get more than 204.5 millimetres of rain in a period of 24 hours.

“Mumbai, Thane, Pune would receive extremely heavy rainfall in isolated places on Tuesday and Wednesday. Raigad has a similar forecast between Monday and Wednesday,” he said, adding that the probability of the forecast is very likely, which means 51 per cent to 75 per cent of actualisation.

Neighbouring Palghar district would get heavy to very heavy rains at a few places on Tuesday and the intensity would increase on Wednesday, the IMD said.

The Brihanmumbai Municipal Corporation (BMC) has appealed to residents to stay at home and urged commercial establishments, except those providing essential services, to remain closed on Tuesday as heavy rains are likely to continue for next 48 hours.

Suburban train services on the harbour line were stopped in the morning due to water-logging on rail tracks while services on the western and central lines were also affected, a civic official said.

Local trains in Mumbai and suburbs are currently being operated only for those involved in essential services in the wake of the coronavirus crisis.

Traffic movement from Byculla to south Mumbai was also affected due to inundation at some places, he said.

The weather station at Mahalaxmi recorded 172 mm rain, while that at Vidyavihar reported 159 mm rain. Besides, the weather stations at Ram Mandir (near Goregaon in western suburbs) and Mira Road recorded a rainfall of 152 mm each.

The other weather stations in north Mumbai and Thane also recorded over 150 mm rainfall.

The trend would continue for next 48 hours, the official said.

The BMC has deployed high capacity water pumps to discharge water from streets in Byculla, Bhandup and some other areas, a civic official said.

The civic body appealed to commercial and business establishments, except those involved in essential services, to remain shut in view of the heavy downpour.

"Residents should also stay at home and avoid venturing out, the BMC said in a statement.