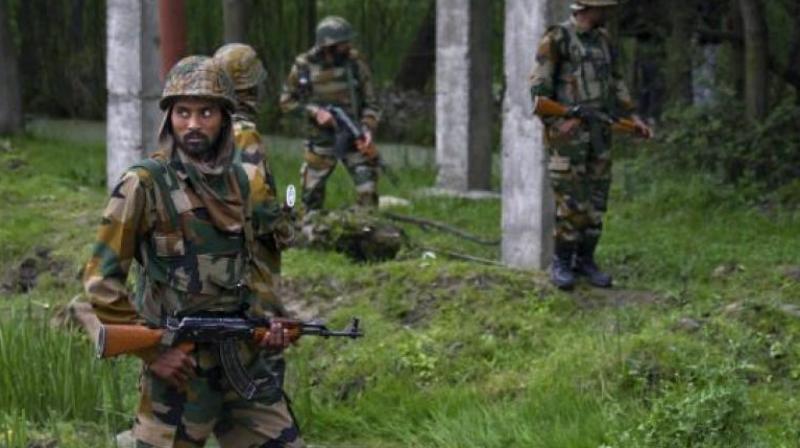 Srinagar: Two Army men, including a Major, and two militants were killed and a soldier wounded on Thursday in separate gun battles in southern Shopian and Kulgam districts of Jammu & Kashmir.

According to the police and Army sources, the victims were part of a convoy ambushed by Hizbul Mujahideen militants while passing through Zainpora village of Shopian, 70 km south of here.

The injured were airlifted to Srinagar’s 92-Base Army Hospital where Major Kamlesh Pandey and sepoy Tanzin Chhultim succumbed to their injuries, while the condition of the third jawan Kripal Singh is critical, sources said.

In a statement to local news agency CNS, Hizb said that the militants involved in the attacks have since returned to their destinations and that they were being rewarded for killing five Indian soldiers.

Its spokesperson Burhanuddin was quoted as saying, “The mujahideen laid an ambush and attacked the Army convoy from all sides. Five Indian soldiers were killed and many others were injured. The mujahideen managed to reach their destination safely after the daring attack.” He warned that such attacks would continue across the Valley. Major Pandey, a resident of Almora in Uttrakhand, had joined the Army in June 2012. He is survived by his wife and a two-year-old daughter.  Sepoy Chhultim of Lahaul Spiti of Himachal Pradesh joined in September 2012, the Army said after the wreath-laying ceremony in Srinagar’s Badami Bagh Cantonment. Chief minister Mehbooba Mufti and Chinar (15) Corps Commander Lt. Gen. JS Sandhu described them as true patriots while paying homage to the deceased.

Two militants were killed late on  Wednesday night in another attack in Gopalpora village of neighbouring Kulgam district, the police said. The duo was killed after the Special Operations Group, the Army’s 9 and 62 Rashtriya Rifles and CRPF’s 18 battalion jointly laid an ambush in the village following intelligence reports about their movement in the area.

“Two terrorists were killed and two weapons were found on them,” said defence spokesperson Colonel Rajesh Kalia. They included one INSAS and one AK-47 rifles.

The police said one of the deceased was involved in the June 16 attack on a police van in which six policemen, including SHO Feroz Ahmed Dar, were killed at Tajwah, Acchabal in neighbouring Anantnag district.