Congress sets up ‘State Bank of Tomato’ in UP

Customers of the bank can get fixed deposit on tomatoes, lockers as well as facility of loans on the same. 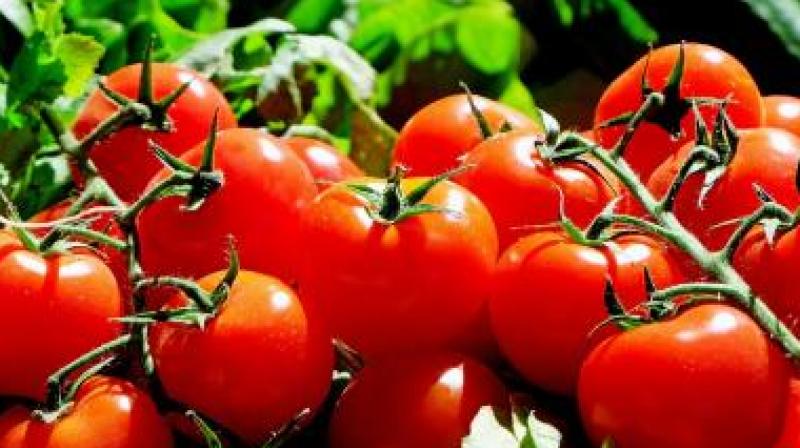 The bank allows its customers to enjoy all the basic banking facilities, the only difference being, everything is related to tomatoes. (Photo: PTI)

Lucknow: Bizarre though it may sound, but it is definitely grabbing attention. The Congress in Lucknow has set up a unique tomato bank for the common man. Called the “State Bank of Tomato”, the initiative is designed to embarrass the BJP government over the spiralling of tomato prices and also register its protest on the issue.

The bank allows its customers to enjoy all the basic banking facilities, the only difference being, everything is related to tomatoes. Customers of the bank can get fixed deposit (FD) on tomatoes, lockers as well as facility of loans on the same.

A long queue of customers outside the bank was seen and people said that they had come here to deposit their tomatoes since the feared that the tomatoes would get stolen from their houses.

“I have deposited 500 grams of tomatoes and have been assured that I will get one kilogram back after six months,” said an elderly citizen who came to deposit the vegetable in the “bank”.

The Congress promises to increase fivefold the to-mato deposits in six mon-ths. The party is offering 80 per cent loan on tomato deposits and also facilities for tomato lockers.

UP Congress spokesman Dujendra Tripathi said that bank was getting a huge response which actually reflected the state of affairs in UP. “If the response increases, we may even open more banks,” he said.

The Congress plans to sell the tomatoes deposited with them to the poor at “normal prices” while the depositors can taken back the tomatoes — in cash or kind — with interest. If the “deposits” increase, the party is ready to take a cold storage on rent, the spokesman said.