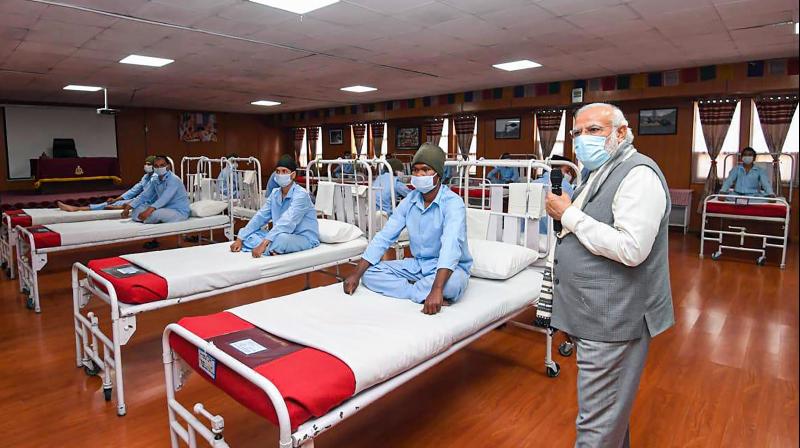 Prime Minister Narendra Modi meets soldiers who were injured in the recent Galwan Valley clash with the Chinese Army, at Leh in Ladakh. (PTI)

New Delhi: The Indian Army on Saturday termed as "malicious and unsubstantiated" criticism in some quarters about a medical facility in a military hospital in Leh where prime minister Narendra Modi interacted with soldiers injured in the Galwan Valley clashes.

In a statement, the Army said, "It is unfortunate that aspersions are being cast on how our brave Armed Forces are treated. The armed forces give the best possible treatment to their personnel."

Prime minister Modi made an unannounced visit to Ladakh on Friday, signalling India's firmness in dealing with the border row with China in several areas of the region.

Modi also interacted with the soldiers who are undergoing treatment at the hospital, and told them that their bravery will be a source of inspiration for times to come.

Following release of photographs of Modi's interaction with the injured soldiers, there were comments on Twitter that the facility did not look like a hospital as there were no medicine cabinet, IV (intravenous) stand, and other medical equipment.

"There have been malicious and unsubstantiated accusations in some quarters regarding the status of the facility visited by Prime Minister Narendra Modi during his visit to the General Hospital at Leh on July 3," the Army said.

The Army further said: "It is clarified that the said facility is part of the crisis expansion capacity of 100 beds and is very much part of the General Hospital complex."

It said the COVID-19 protocol had necessitated some wards of the hospital to be converted into isolation facilities.

"Hence, this hall which otherwise was normally used as a Training Audio Video Hall was converted into a ward ever since the hospital was also designated as COVID-19 treatment hospital," it said.

The Army said the "injured braves have been kept there since their arrival from Galwan to ensure quarantine from COVID areas. The Chief of Army Staff General M M Naravane and the Army Commander have also visited the injured braves in the same location."

The Indian and Chinese armies are locked in a bitter standoff in multiple locations in eastern Ladakh for the last seven weeks.

The tension escalated manifold after 20 Indian soldiers were killed in a violent clash in Galwan Valley on June 15. The Chinese side also suffered casualties but it is yet to give out the details.