Rane with his supporters was protesting the bad condition of the potholes-ridden highway. 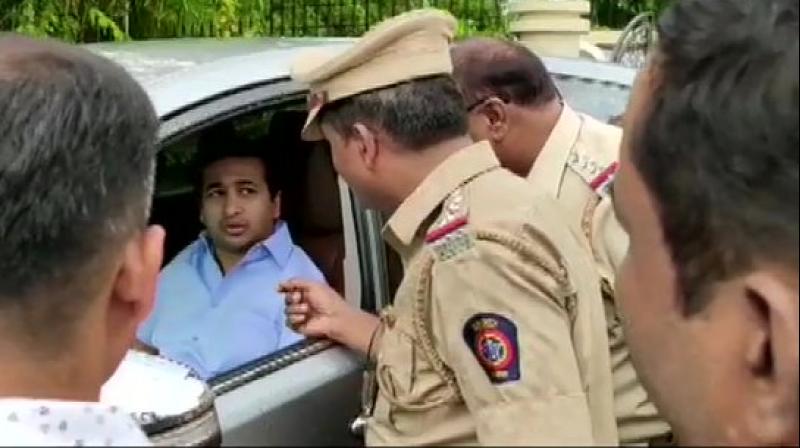 Rane and two of his supporters were taken into custody by the Maharashtra police for 'assaulting' a deputy engineer, officials said. The accused will be produced in the court on Friday. However, the search for other accused is on.

Earlier in the day, Nitesh Rane and his supporters threw mud on an engineer and tied him to a bridge near Mumbai-Goa highway in Kankavali, ANI reported and released a video of the incident.

Rane, son of former Maharashtra chief minister Narayan Rane with his supporters was protesting the bad condition of the potholes-ridden highway. They later tied him to the bridge, ANI reported.

#WATCH: Congress MLA Nitesh Narayan Rane and his supporters throw mud on engineer Prakash Shedekar at a bridge near Mumbai-Goa highway in Kankavali, when they were inspecting the potholes-ridden highway. They later tied him to the bridge over the river. pic.twitter.com/B1XJZ6Yu6z

Apologising for his son’s action, he said, "This behaviour is wrong. The protest over the highway issue is correct but this violence by his supporters is not correct. I don't support this."

Asked whether he would ask his son to apologise, Rane senior said: "Why won't I ask him to apologise? He is my son. If a father can apologise for no fault of his, son will have to apologise."

In similar previous incident, Rane had thrown fish at a government officer attached to the fisheries department in Kankivali while complaining over issues concerning fishermen.

This is the second incident in a recent time when a son of a politician is seen assaulting a government official. Earlier, Bharatiya Janata Party MLA Akash Vijayvargiya assaulted a civic official with a bat for opposing the demolition of an old house in Madhya Pradesh.