The other indices of India’s healthcare are also alarming — with 63 million people pushed into poverty due to healthcare expenses. 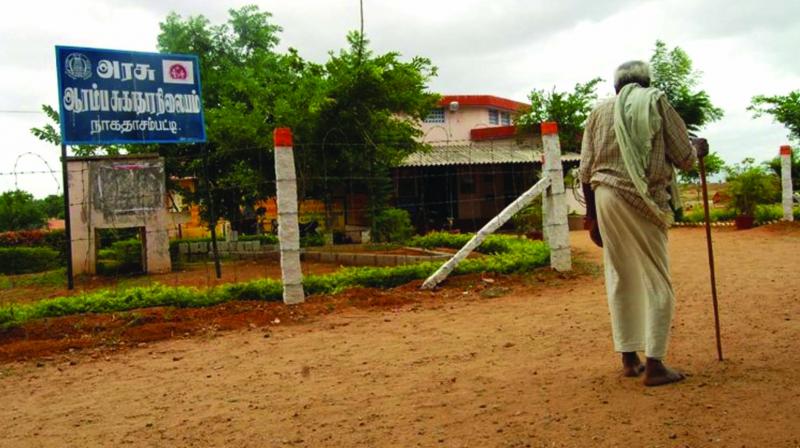 An elderly man walking to a Primary Health center in Tamil Nadu.

India’s economy is soaring and is now the world’s envy, but its healthcare system remains an Achilles’ heel. For millions of people, the high cost of treating illnesses continues to undermine economic progress. This is largely on account of India’s dilapidated healthcare system — a major symptom of the dire lack of funding. India ranks poorly in international rankings on most health indices.

The World Health Organisation (WHO) has found that 50-65 per cent of Indians lack access to essential medication, despite the country being the largest producer of generic medicines. This signals a need for the government to mass produce generic essential medication and distribute them to the population across the country through public health clinics.

Another point to be noted is that the growth of healthcare facilities has been concentrated in the private sector, while, governmental hospitals continue to be under-resourced, understaffed and poorly managed, thereby delivering poor quality of care. This has led to a rapid mushrooming of unregulated private providers, which today accounts for 93 per cent of all hospitals, up from 8 per cent in 1947. Private facilities also account for 64 per cent of all beds and employ 85 per cent of all doctors in the country. This contributes to the ever-widening gap in access to healthcare between rich and poor communities in India.

The other indices of India’s healthcare are also alarming — with 63 million people pushed into poverty due to healthcare expenses. Additionally, hospital bed density in India is merely 0.9 per 1000 persons, while the minimum advocated by the WHO is 3.5 beds per 1,000 people. Similarly, India only has around 0.7 doctors per 1,000 people, while the WHO’s minimum is 1 doctor per 1,000 people. Out-of-Pocket (OOP) expenditure on healthcare in India — personal spending — contributes to approximately 86 per cent of private expenditure and 60 per cent of overall healthcare expenditure in the country and is much more than the rates in countries like Thailand (25 per cent) and China (44 per cent).

According to the international consultancy, KPMG, the number of healthcare personnel and infrastructure is highly disproportionate for India’s burgeoning population and voluminous disease burden. The country shares about 20 per cent of the burden of global diseases. However, in terms of global infrastructure share, India has only 6 per cent beds and 8 per cent doctors. In terms of public healthcare coverage, the statistics are horrific. There is one government doctor for every 10,189 people, one hospital bed for every 2,046 people, and one government-run hospital for every 90,343 people. These are certainly mind-numbing figures.

Healthcare expenses are a major cause of impoverishment of working families in India. Private healthcare has catastrophic costs that shave off hard-earned savings of patients and their families, thereby, becoming a primary route to bankruptcy.

All these have spillover consequences for families resulting in less money available to households for food, education, housing and long-term plans. According to Dr David Dror, founding chairman of the Micro Insurance Academy and an expert on the Indian health insurance system, “A health event is a bigger risk to farmers than an unsuccessful crop.” He adds, “Once they sell their land or livestock, they become indentured labourers. That takes a generation to fix.” By managing risks and avoiding debt, those who have micro-insurance policies are in a position to protect the meagre wealth they accumulate, generate more income and even get a fair chance to rescue themselves and their families out of the mire of poverty.

Health insurance is emerging as an important financing tool in meeting the healthcare needs of the poor. Life is a tough ordeal for families hit by “health shocks”. Poor families have long suffered the triple curse of sudden illness — the trauma associated with sickness, the financial burden of intensive healthcare and the loss of wages.

The poor prefer health insurance to life insurance, as they say, “We die once but go to the doctor many times each year.” By hedging life’s uncertainties, they are in a position to protect the wealth they accumulate, generate more income, and can even get a fair chance to rescue themselves and their families out of the mire of poverty.

Community-based health insurance, rather than market-mediated or government-provided insurance, is widely considered an appropriate way of reaching and protecting the poor. The development of private health insurance has potential risks and benefits in terms of healthcare access for the poor. It could result in substantial long-term welfare benefits but it is unaffordable for most low-income families.

India must revitalise its public health system to ensure access, outcome, quality and affordability. The focus must be on finding solutions which are affordable, scalable and yet of a high quality. The government needs to supplement curative services with preventive measures by strengthening ancillary civic services like insect management, water purification systems, sewage systems and plants for treatment of industrial effluents and waste. Due to poor hygiene and sanitation, people are suffering from pneumonia, malnutrition, malaria and tuberculosis across the country.

The biggest disease burden sits on the bottom pyramid of 500 million people. They don’t have access to reliable diagnosis or proper treatment. If they get diagnosed, they find it hard to get treatment. The government-run hospitals are free for everyone, but access is difficult, quality is abysmal and corruption is endemic. Another challenge for the health sector is the lack of provisions to deal with non-communicable diseases such as cardiovascular diseases, cancer, chronic respiratory diseases and diabetes.

Unlike the short-term effects of communicable diseases, the dual health and economic impacts of non-communicable diseases on individuals, families and households are devastating and long-lasting. It is estimated that India is likely to lose $4.58 trillion before 2030 due to NCDs, as government-run healthcare system focuses only on maternal and child care, especially at the rural level. This would mean providing a clean environment and potable water so that infectious diseases are contained to the minimum and a stress-free and healthy lifestyle is promoted to ward off the growing threat of non-communicable diseases.

We need a National Medical Service under the National Health Mission that can have a national pool of doctors who can be distributed across the states to correct unevenness of the quality of medical services in different regions Pooled public procurement and strategic purchasing of equipments and medical supplies will save costs and help attain efficiency, thereby promoting quality controlled health services. Sharing of best practices can help tone up the deficient regions. The flow of talents through this national medical cadre will bring about more balanced development of health services at the national level.