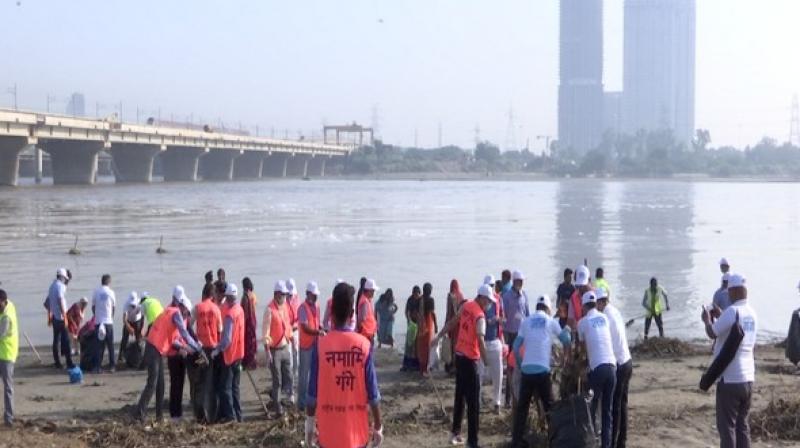 With macroscopic vision, NMCG is devoted to cleaning all the tributaries and restoring the glory of river Ganga. (Photo: ANI I Representational)

Mathura: Rising in the Himalayas and flowing to the Bay of Bengal, Ganga traverses a course of more than 2,500 km through the plains of north and eastern India.

Serving as one of India's holiest rivers, Ganga is joined by Ramganga, Gomti, Ghaghara, Gandak, Kosi, and Mahananda from left bank and Yamuna, Tamsa, Son and Punpun from the right bank.

Ganga can't be clean unless its tributaries are clean.

Under the Namami Gange programme, the government has initiated several major projects to clean Ganga and its tributaries.

The Yamuna, the westernmost and the longest tributary of the Ganga, has its source in the Yamunotri glacier on the western slopes of Banderpunch range. It joins the Ganga at Prayag and holds 40.2 percent of the entire Ganges Basin.

To preserve people's faith in the purity of the river, the National Mission for Clean Ganga under its Namami Gange programme has been taking significant steps towards keeping the holy waters of Yamuna clean from sewage generated in cities falling along its course.

Situated on the banks of Yamuna, Mathura is a densely populated city in Uttar Pradesh. The city discharges approximately 48 million litres of sewage on a daily basis.

Taking the onus of treating the sewage and preventing it from falling into the Yamuna, projects worth 460 crores have been sanctioned by NMCG.

The projects are based on Hybrid Annuity Model that ensures continued performance of the sewage infrastructure and better accountability of payments done to the operating entity.

A new Sewage treatment plant has recently become operational in Laxmi Nagar area that would treat 20 million litres of sewage per day. The treated water will be supplied to Mathura Oil refinery under an agreement between NMCG and Indian Oil Corporation Limited.

Another 30 MLD Sewage treatment plant is under construction in Masani area which would increase the total sewage treatment capacity of the city from 40 MLD to 67 MLD.

Asok Kumar, Executive Director (Projects) at National Mission for Clean Ganga said, "The Yamuna which joins at Prayag is also having a lot of pollution load in it. We can see the type of water in and around Delhi is again full of sewage. The Yamuna that Joins Ganga at Prayagraj also bring in a lit bit of pollution with that.

Kali is one that brings in a lot of pollution load into the river but it also adds to the water load in the river, so all tributaries are equally important and Ganga can be cleaned only when all the tributaries are taken up simultaneously".

With macroscopic vision, the National Mission for Clean Ganga is devoted to cleaning all the tributaries and restoring the glory of river Ganga.