India   All India  04 Jul 2019  Healthcare in India is in abysmal shape, must be shaken out of comatose state
India, All India

Healthcare in India is in abysmal shape, must be shaken out of comatose state

The story of infants and children dying due to AES remains the same. 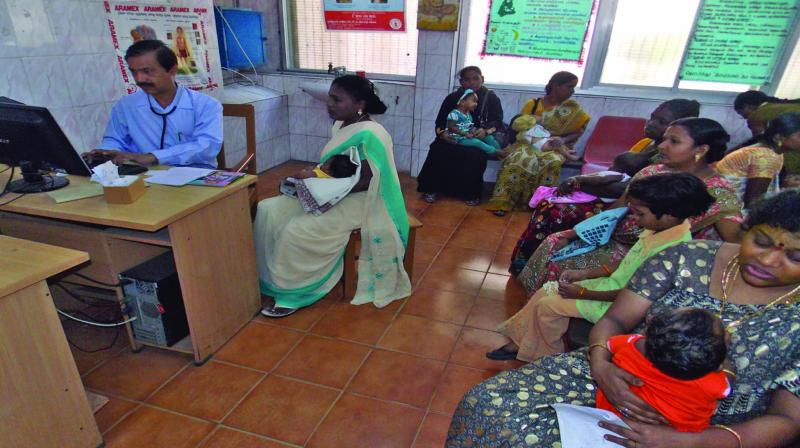 Primary Health Centres (PHCs) are not present in many villages (about 1 for every 20), and where present, are so severely undermanned that the ‘access’ system is completely broken.

While recently re-reading Aravind Adiga’s The White Tiger, I was brought again to the brink of tears by the passage that describes how the protagonist Balram’s father dies of tuberculosis in the corridor of a municipal hospital in the fictitious Laxmangarh. They spread his body out on a newspaper, they wait and wait for the doctor who never arrives until their father, an emaciated rickshaw puller, coughs up all his life blood and then dies unattended.

One does not have to turn to fiction as the facts are an even harsher in reality. India’s poor often die in the corridors of the overcrowded and understaffed municipal hospitals across the great subcontinent. Only recently, about a 100 children have died of acute encephalitis syndrome (AES) in the past fortnight in Muzaffarpur district in Bihar, while more than 600 children across 16 districts of Bihar this year have been infected.

The story of infants and children dying due to AES remains the same. This is not the first time that this disaster has occurred. Five years ago, there was an outbreak of the disease in Bihar itself, but nothing much has changed since then — it is “the song of never-ending beeps from the monitors, the unblinking eyes of the children and their frothing mouths,” to quote journalist Chinki Sinha, who was reporting from the trenches.

Even though the Union health ministry has expressed alarm over the deaths, and they speak of putting in place a plan to tackle the disease, (as vague as every), but my question is, why do we always react to disaster rather than plan ahead? Especially when it comes to recurring epidemics that can be stemmed and treated if timely action is taken. More often than not, India’s poor or lower-middle-class dies due to lack of access to healthcare and when there is access, there is a lack of quality. The figure for people who die of treatable ailments in our country is a staggering 2.4 million.

The apathetic attitude often stems from the high birth rate. I have often heard comments like, “Oh so what if a few millions die — millions are born every day!” It is this shocking lack of value for life that marks the approach towards public healthcare systems in this country. “We need to better measure the quality of our health system as a composite entity rather than merely being content with certifying hospitals and laboratories,” to quote K. Srinath Reddy, president of the Public Health Foundation of India, which is a Delhi-based thinktank. The mechanisms for monitoring the quality of healthcare in India are not in place and in most cases, are unavailable.

Simple things like a CT scanner are not even available in many of India’s urban hospitals (you would be shocked to know that one such hospital is in Mumbai!) — and then patients are sent off to expensive private centres for the procedure. Many of India’s poor cannot even afford to buy the expensive medication that is prescribed by doctors — let alone afford a CT scan. With the poor amounts of funds allocated to healthcare in our country, our hospitals lack simple things like the supply of critical equipment and consumables (including syringes, oxygen, etc.). The number of hospitals and the retained staff of doctors, specialists, nurses and assistants are dismal when compared to nations like China and Brazil that spend up to three and five times the amount on healthcare. If it is not lack of access, it is a lack of affordable medical care.

Moreover, across political parties, healthcare is given a low priority. As a result, India performs poorly in care delivery — our health indices are some of the worst in the world. Just before the run-up to the elections, there was a ray of hope — we saw that the Congress manifesto had proposed the idea of a Right to Healthcare Act, while the BJP promised more funding for healthcare with its Ayushman Bharat policy — which by the way, is used to garner healthcare to the tune of `6,400 crores, but only to benefit the private sector. Once again, the poor and middle-class were left out of the picture. Often issues of security and religion outstrip the simple needs of the poor, like access to water and good healthcare. Healthcare often takes a backseat when it comes to pressing the button in the booth and it hardly ever becomes a mandate for elections.

One bold step that has been proposed by the Niti Aayog is to overhaul the Medical Council of India (MCI). The logic behind this replacement scheme is because the MCI has been a bribe-taking organisation for accreditation of medical colleges. It has reportedly used its authority to require that doctors without specialised degrees cannot perform the most routine of procedures like caesarean sections or ultrasounds. Absurdly, this means that even MBBS doctors are not allowed to legally treat some of the leading causes of death in India.

In villages, Primary Health Centres (PHCs) are supposed to feed medical cases that require treatment to specialist hospitals in districts and further on to the state-level specialist hospitals. PHCs are not present in many villages (about 1 for every 20 villages), and where present, are so severely undermanned that the “access” system is completely broken.

It goes without saying that much work needs to be done to figure out a combination of methods to address the needs of a heterogeneous India that caters to the urban and rural populations, rich and poor and formal and informal workers. More than ever, India needs a robust healthcare system in place.