India   All India  04 Jul 2019  Economic Survey: Centre and states on the path of fiscal consolidation
India, All India

Economic Survey: Centre and states on the path of fiscal consolidation

‘Despite several headwinds, Indian economy is expected to grow at 6.8pc in 2018-19 while maintaining macro-economic stability,’ it said. 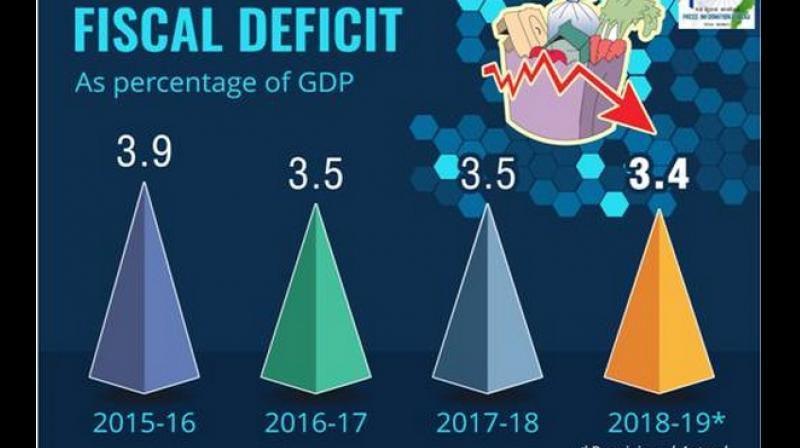 Total liabilities of the central government at end-March 2019 stood at Rs 84.7 lakh crore of which 90 per cent was public debt. (Photo: Twiter | @PIB_India)

New Delhi: As the Centre and states continue to be on the path of fiscal consolidation and discipline, revenue augmentation and expenditure rationalisation continue to be integral to fiscal reforms, the Economic Survey said on Thursday.

"Broadening and deepening the direct tax base and stabilisation of Goods and Services Tax (GST) are the other priorities. Improving the quality of expenditure remains the key priority. Meeting allocational requirements without diversion from the newly revised fiscal glide path remains the foremost challenge, said the survey.

"Despite several headwinds, Indian economy is expected to grow at 6.8 per cent (as per provisional estimates released by Central Statistics Office) in 2018-19 while maintaining macro-economic stability. The growth with macro-stability stems mainly from ongoing structural reform, fiscal discipline, efficient delivery of services and financial inclusion," said the survey tabled by Union Minister for Finance and Corporate Affairs Nirmala Sitharaman in Parliament.

With respect to states finances, their own tax and non-tax revenue display robust growth in 2017-18 which is envisaged to be maintained in 2018-19, said the survey.

Central Government finances over the last several years have seen an improvement in the tax to GDP ratio, consolidation of revenue expenditure, gradual tilt towards capital spending and consistent decline in total liabilities of the central Government. All these have resulted in a progressive reduction in primary and fiscal deficits over the years, said the survey.

Total liabilities of the central government at end-March 2019 stood at Rs 84.7 lakh crore of which 90 per cent was public debt. Most of the public debt has been contracted at fixed interest rate making India's debt stock virtually insulated from interest rate volatility.

This lends certainty and stability to budget in terms of interest payments. The other salient feature is the gradual elongation of the maturity profile of the central government debt leading to reduced rollover risks, according to the survey.