India   All India  04 Jun 2021  Govt says will have enough vaccine doses by Aug to vaccinate up to a crore per day
India, All India 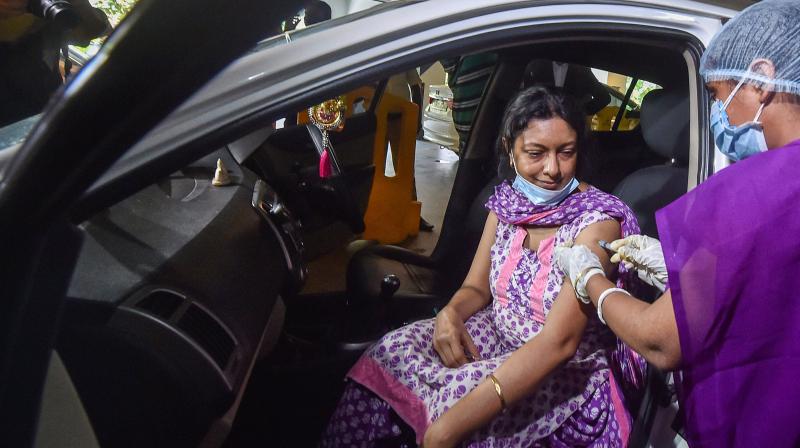 A beneficiary receives her first dose of Covid-19 vaccine at a parking lot in Kolkata. (Photo: PTI)

New Delhi: India will have enough COVID-19 vaccine doses to inoculate up to one crore people per day by mid-July or early August, the government asserted on Tuesday as it underlined that there is no shortage of jabs and called for patience citing the country's large population.

Noting that the ferocious second wave is on the verge of abating, the government said that ramping up of testing as well as containment at the district level "has worked" in bringing down the cases.

At the same time, it cautioned that while the easing of lockdown is imperative, it has to be done very slowly.

Whatever we know from possible scenarios presented by eminent people, it (COVID) will decline and June will be much much more better but the concerns are when we open up how do we behave because the virus has not gone anywhere, NITI Aayog member (Health) V K Paul said.

Addressing a press conference, ICMR Director General Dr Balram Bhargava said India's vaccination is being ramped up and "by December we hope to have the whole country vaccinated".

He mentioned that India is one of the five countries which are producing vaccines and asserted that "there is no shortage of vaccines".

"By mid-of year, mid-July or early August, we will have more than enough doses to vaccinate up to a crore per day," he said.

The cumulative number of COVID-19 vaccine doses administered in the country has reached 21,60,46,638, according to the ministry data updated this morning.

"We are moving in the right direction. Testing has been ramped as well as the containment at the district level has worked. However, it is not a sustainable solution and we have to find a mechanism on how to ease our containment or lockdown and that has to be done very gradually.

"The opening up revolves on three pillars, the test positivity rate in that particular district has to be less than 5 percent for over a week, at least 70 percent of vulnerable population should be vaccinated and community ownership for this COVID-19-appropriate behaviour as well as care should be taken up by the community in a big way," he said.

"It went beyond estimates. It is coming down but change happened because of restriction-based containment was implemented intensively," he said.

Agarwal said there has been a continuous decrease in daily cases since India reported a peak on May 7.

There has been an almost 69 percent decline in COVID-19 cases since the highest peak, he said.

Also, there has been a consistent decline in active cases which presently stand at 18.95 lakh.

A decrease in active cases by more than 18 lakhs since the peak on May 10 (a decline of almost 50 percent) has been observed.

The daily positivity rate reported on Tuesday is 6.62 percent, the lowest since April 1.

Paul said mixing of COVID-19 vaccines is not in protocol and clarified that there is no change in the schedule of two-dose vaccines Covishield and Covaxin.

On COVID-19 among children, Paul cautioned that even though the coronavirus infection has not taken a serious shape among children till now, its impact can increase among them if there is a change in virus behaviour or epidemiology dynamics, and said preparations are on to deal with any such situation.

"We reassure you that the needs of the paediatric population will be arranged and no gaps will be left," he said, adding "we will do an audit of what is required and would be required in the worst-case scenario and be put into action."

Paul said multi-system inflammatory syndrome (MIS-C) has been seen post-COVID among children and a national group has been formed to look into the pediatric complications related to the infection.

He refused to comment on the doctors' protest on a statement by yoga guru Ramdev on allopathy.