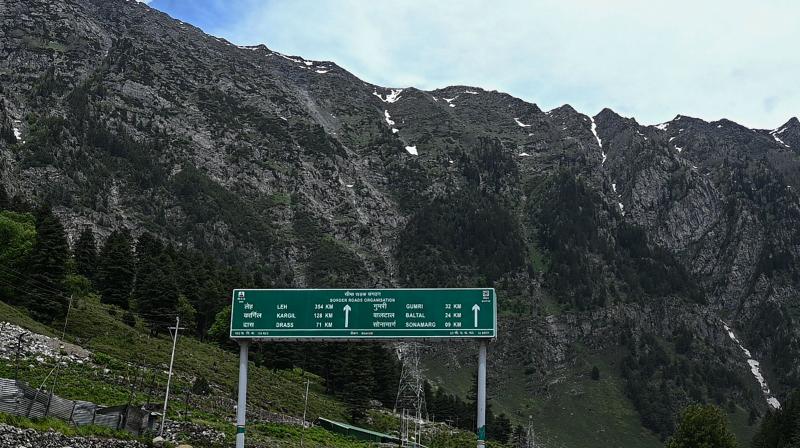 A roadsign displaying distances to Leh (top R), the capital of the union territory of Ladakh, is seen along the Srinagar-Leh National Highway in Sonmarg some 89 Kms of Srinagar. AFP photo

New Delhi: There appears to be some breakthrough in the stand-off between India and China at Ladakh before the crucial high level military talks on Saturday, with reports suggesting that both armies have retreated from one of the flash point in the Galwan Valley.

According to TV reports, in one of the flash points in Galwan Valley the Chinese army has retreated by 2 kilometers and Indian army by one kilometer.  At Galwan valley there are three flash points between Indian and Chinese armies.

The high level military talks between Indian and Chinese officers expected on Saturday will mainly discuss stand-off between the two armies at Pangong Tso lake. According to sources, the stand-off at the Galwan Valley may not be on the agenda as India believes that in this area Chinese have come at a place which was never disputed.

However, there was no official confirmation on the agenda of the meeting.

Defence minister Rajnath Singh had said on Tuesday that a meeting of high level army officials from both sides is scheduled on 6th June to try to resolve the issue.

The Leh-based 14 Corps Commander Lt Gen Harinder Singh is scheduled to hold talks with his Chinese counterpart to resolve the matter. The meeting will take place at Chushul-Moldo.

In the northern bank of Pangong lake, India claims that its area is from Finger area 1 to Finger 8 and Chinese claim their area to be from Finger 8 till Finger 2. The stand-off between the two sides usually happens when patrol parties come face to face between finger area 4 and 8 which is claimed by both sides.  This time, sources said that Chinese have brought a large number of troops to lay its claim in the area and prevent patrolling by Indian troops.

Fist fight and stone pelting had occurred between Indian and Chinese soldiers on Pangong Tso lake on the intervening night of May 5th and May 6th.

Meanwhile, Amid the ongoing standoff with India, the Chinese military in Tibet has held night-time high-altitude “infiltration exercises behind enemy lines”, the Chinese state-owned media reported.

It is suspected that some troops from this exercise were diverted by the People’s Liberation Army towards the Line of Actual Control at Ladakh.

A report in Beijing’s Global Times said the PLA Tibet Military Command had recently sent troops to a high-altitude region at an elevation of 4,700 meters at night for infiltration exercises behind enemy lines and tested their combat capability under a harsh environment.