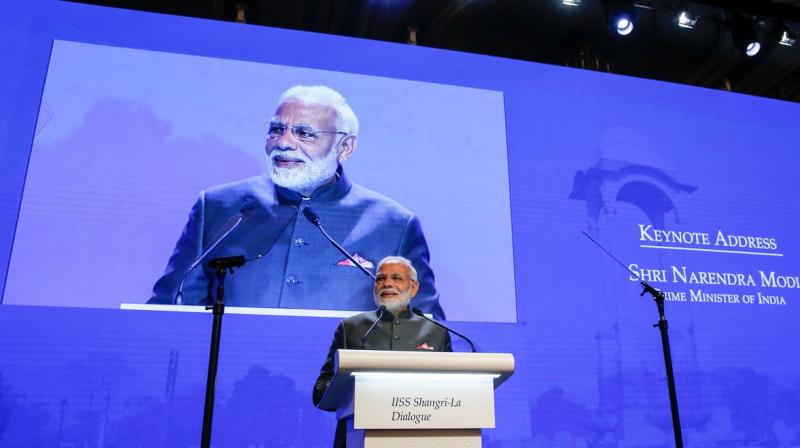 Prime Minister Narendra Modi had said the two Asian neighbours have shown 'maturity and wisdom' in managing issues and ensuring a peaceful border, adding cooperation between the world's two most populous countries was expanding. (Photo: Twitter/@MEAIndia)

Beijing/New Delhi: Prime Minister Narendra Modi's “positive remarks” in his keynote address at the Shangri-La Dialogue last week that Asia and the world will have a better future if India and China worked together with trust, has received praise from the communist nation.

The Shangri-La Dialogue in Singapore is Asia's top conference on defence and strategic affairs.

Prime Minister Narendra Modi had said the two Asian neighbours have shown "maturity and wisdom" in managing issues and ensuring a peaceful border, adding cooperation between the world's two most populous countries was expanding.

Indian and Chinese troops were locked in a tense 73-days standoff last year when Indian troops entered the Doklam plateau to stop the Chinese military from constructing a new road, which New Delhi viewed as a serious security concern because of the access it provides to Beijing.

In April, Prime Minister Narendra Modi went to China where he held an informal summit with Chinese President Xi Jinping. Even then too, in his remarks at the delegation-level talks, PM Modi had emphasised the global leadership role the "two major powers" India and China could play.

"In the last 1600 years, the economies of India and China have contributed about 50 per cent of the global economy," PM Modi had said.

Hua said that the two leaders indeed had "in-depth exchange of views on the international landscape and bilateral relations and reached many consensus."

India and China have been treading cautiously on expanding their influence in Asia and beyond without bumping into each another. The China-Pakistan Economic Corridor or CPEC, however, passes through parts of Pakistan-occupied Kashmir.

The 50 billion dollar corridor that connects Kashgar in western China with Gwadar port in Pakistan, spanning 3,000 kilometres, is one of the pain points in ties between India and China. India has protested against China's CPEC push from the very beginning.