Ever since a video of Srivastav, a college teacher, dancing like a man possessed has gone viral on social media, fame has chased him like a mad dog. 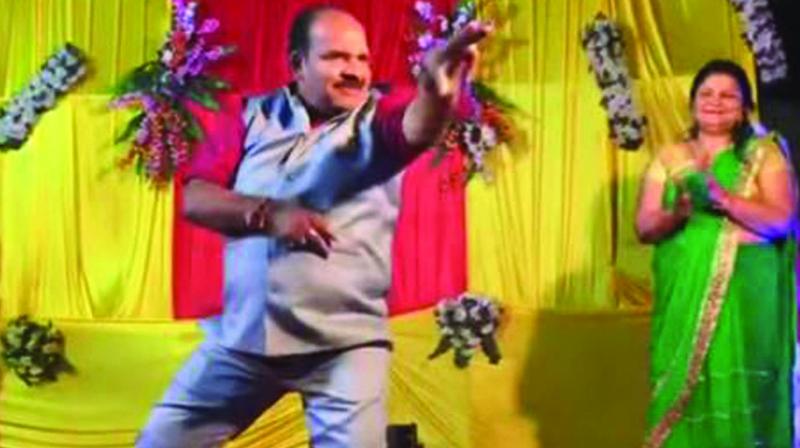 Sanjeev Srivastav during a dance performance.

Bhopal: Madhya Pradesh’s “dancing uncle” finds his newly acquired celebrity status too hot to handle. Prof. Sanjeev Srivastav, 46, flew to Mumbai on Sunday morning to review offers he has received from some Bollywood actors, a top reality show and some entertainment channels besides some advertisement companies.Ever since a video of Prof. Srivastav, a college teacher, dancing like a man possessed has gone viral on social media, fame has chased him like a mad dog. His cell phone has just refused to stop ringing. “So many calls, such a huge media coverage! We find it so exciting to cope with the limelight we are hogging,” Anjali Srivastav, wife of the latest dancing sensation, said.

“I am now in the middle of a meeting with Sunil Shetty in his house in Mumbai,” the faculty member of Vidisha College told this newspaper on phone on Sunday evening indicating the prospects of his sealing a deal with the Bollywood star. “It was just bewildering. The chief minister (Shivraj Singh Chouhan) took note of my success. I was made the brand ambassador of Swachh mission by Vidisha Municipal Corporation and also flooded with appreciations from Bollywood stars,” he observed.

The video showing him dancing elegantly with flowing body movements as if he was meditating was posted in Facebook account by one of his acquaintances three days ago.